The final game of the Rookie Showcase tournament for the Jets.

The Jets prospects earned a 2-1 win last night over the Habs prospects courtesy of a goal by 2019 1st rounder Ville Heinola and a shorthanded game-winner by 2017 3rd rounder Johnathan Kovacevic as well as the backstopping of goalie Griffen Outhouse who saved 20 of the 21 shots he faced.  Tonight they will wrap up things up against a Senators prospect team that beat them 8-1 on Friday night to open this tournament. 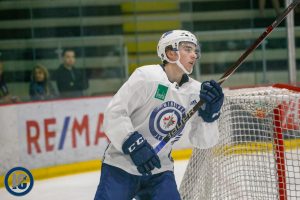 There was no morning skate today but we’ve learned courtesy of Jamie Thomas of Jets TV that these will be the lines, D pairs and starting goalie:

Hear from Joona Luoto and coach Vincent from this morning in Belleville.

The game gets underway at 6 pm.  You can watch it on TSN.ca or the TSN App.