Note:  With yesterday’s news that Ken Wiebe was switching from the Winnipeg Sun to The Athletic Winnipeg I have a chart out which gives fans a look at the collective coverage of the Jets here in Winnipeg.

Grand Forks Herald:  Winnipeg’s changes on defense may open door for Tucker Poolman.  (Requires answering a survey question to read). Brad caught up with the D man in Grand Forks who is going to have a big opportunity in front of him this season in Winnipeg.  If he can continue his play from last season with the Moose he should prove more than able to handle it.  (Note: Since Brad’s paper is US based they use the American spelling of defence in the headline which I left alone).

The Athletic Winnipeg: On centre issues, changes for 2019-20 and the future of his young stars. (Paywall). Murat sat down with the Jets bench boss for a one-on-one chat.  (This is part one of two).

Winnipeg Sun: Pionk ready to seize opportunity within Jets’ defensive core.  With all the changes to the back end there will certainly be opportunity.  Scott Billeck caught up with the new Jets defender yesterday at Bell MTS IcePlex.

TSN:  Pressure building in Winnipeg after quiet summer.  It is all adding up to making this a notable September at least. 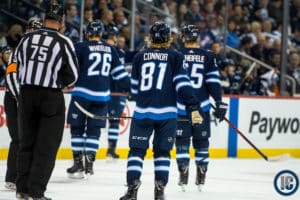 Ken Wiebe of The Athletic joined Andrew Paterson and Rick Ralph on the Afternoon Ride. They discussed his new role at The Athletic, the main storylines heading into Jets training camp, the team’s unsigned RFAs, the battle for the second line centre spot and possible line combinations to start the season.