Note:  Today at 9 am New York time the Andrew Copp salary arbitration hearing gets underway between him and the Jets (each side gets a maximum of 90 minutes to present with a possible additional 10 minutes for the first party to speak if the second party brings up something that requires surrebuttal (ah the joy of the CBA).  The ruling “must be issued by e-mail to each of the parties simultaneously within forty-eight (48) hours of the close of the hearing.”.  Which means by Tuesday (at the latest) Andrew Copp will have a two-year deal (because the player elected for the arbitration it means the Jets get to choose term and they picked two years) for a yet to be determined amount. And so we wait.

Note II:  Provided the Jets and Neal Pionk don’t come to terms we should learn the salary arbitration numbers on Monday as filings are due from both Winnipeg and the player on the 22nd with his hearing scheduled for Wednesday, July 24th.

The Athletic:  How the Jets and assistant Todd Woodcroft build, coach and use their centres.  (Paywall).  There is a coaches summit over in Toronto and the always interesting Jets assistant coach had plenty to say about the men in the middle. 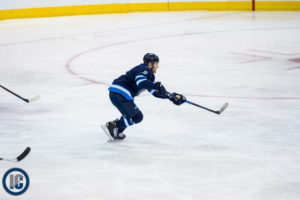 Brandon Sun: Geekie celebrates Calder Cup win in Strathclair. (Paywall). The Canes 2017 3rd rounder had a really good rookie season in the AHL which culminated with a Calder Cup win with the Checkers.