Jets news: Not deviating from master plan. Hainsey hangs in there. Needing answers for lack of talent, road woes. Out of playoffs, but fans still thankful.

General NHL: Final countdown for Sabres. Leafs’ lost opportunity. Looking back and looking forward for the Habs. Case of the Mondays.

Winnipeg Free Press:  Jets send Wellwood home with a broken ankle.  It was a career year for the enigmatic Wellwood.  Will be interesting to see what the Jets offer him to retain his services for next season.

Winnipeg Free Press:  Jets won’t deviate from master plan.  Long term commitment to a plan is never an easy task to follow, especially not in the instant gratification society that we currently live in.  While fans are thankful for the return of the NHL, that can only carry so far, before they start to demand this team begin to achieve.

Winnipeg Sun:  Hainsey hangs in there.  I, for one, was not expecting Ron Hainsey to step up to Malone on Saturday night.  Some other news and notes include Bogosian talking about home record, needing a strong finish and no discipline for errant Jets. 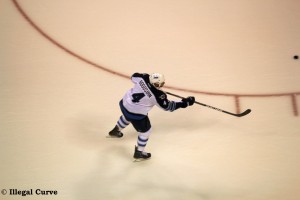 Winnipeg Sun:  Needing answers for lack of talent, road woes.  Which is why the season might be ending on Saturday, but we will have months to continue to look at this Jets lineup and watch as GM Cheveldayoff and his squad form this team as they best see fit.

CBC:  Out of playoffs, but fans still thankful.  It has been a roller coaster of ‘fun’ for Jets fans across this great province but as many would say, they would rather have this feeling, than the alternative.

Miami Herald:  Florida falls to Detroit.  The Panthers haven’t been playing there best hockey of late but have a chance to clinch their first post season berth since 1999/00 against the Jets on Tuesday night.  Datsyuk pulled off a sick move against the Panthers, which didn’t result in a goal for the Wings, but showcased the Russian’s talent.

Buffalo News:  Final countdown.  Quite possibly the most disappointing season for the Sabres in recent memory.  What began with so much promise could be over with another loss.

Montreal Gazette:  Looking forward and looking back.  The lights always shine rather bright in Montreal as the sole focus is on the Habs and their fall from the playoff race.

ESPN:  Case of the Mondays.  A look back at all the action from the NHL this past weekend.