Jets news: Trainer for a day. Coach’s lines. All’s well that ends Wellwood’s season. Game strip. Cormier called up. Where it all went wrong for Jets.

Affiliate news – St. John’s IceCaps: When too many is not enough. Jason King is IceCaps’ nominee for AHL man of the year award.

Winnipeg Free Press:  Trainer for a day.  Have you ever wanted to be the Jets trainer?  Well these kids are having the times of their young lives as they get to participate during a Jets game day.

Winnipeg Free Press:  Coach’s lines.  A little Q & A with the Winnipeg Jets coach.  From free pizzas to opening his press conferences with “hello beauty’s” the first year Jets coach has tried to have fun while at the same time holding his squad to higher standards.

Winnipeg Free Press:  All’s well that ends Wellwood’s season.  It has been quite the turnaround season for the Windsor native who split last season between the KHL and the San Jose Sharks.  He appears to have found a home in Winnipeg and it will be interesting to see what happens with him as he will be a UFA on July 1st.


Winnipeg Free Press:  Game strip.  The Jets and Panthers have played some entertaining hockey games so far this season and while the Jets aren’t playing to get into the playoffs, Florida needs to win to clinch.

Winnipeg Sun:  Cormier called up.  A little sandpaper for the Jets lineup as a healthy Cormier will add some toughness to this Jets team.

Winnipeg Sun:  Where it all went wrong for Jets.  There are a number of games that you could point to and say the Jets should have had that game.  The Flyers game where Simmonds scored with 10.8 seconds to go and the 0-0 Capitals game which Ovechkin ended with a 3rd period goal with 1:14 left stick out in my mind.

The Telegram:  When too many is not enough.  Lots doing with the Jets farm team and Brenden McCarthy gives you the full rundown.

The Telegram:  Jason King is IceCaps’ nominee for AHL man of the year award.  A worthwhile nominee for the first time in St. John’s.

Sun-Sentinel:  Panthers focused on Winnipeg.  Seems every game for the teams in the Southeast division has been a “must win” game against the opposition.  Florida can clinch with a win against the Jets tonight as the division rivals renew hostilities. 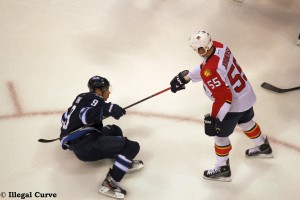 Miami Herald:  Surprise, surprise, Panthers being carried by their goalies.  Both Clemmensen and Theodore have stood tall for the Cats this season and are a big reason they are in line to make the playoffs for the first time since 1999/00.

Buffalo News:  Sabres’ margin for error nearly zero.  Terry Pegula should be sending the Lightning some nice treats after the Bolts knocked off the Capitals and kept the Sabres slim playoff hopes alive.

Tampa Bay Times:  Stamkos scores twice late to help Tampa defeat Capitals.  The Bolts are looking to get Stamkos to 60 and got him 2 goals closer as he scored goals #57 and #58 last night.  He managed to score his 58th with less than 1 second on the clock.

Pittsburgh Post-Gazette:  Fixes, not hype, Penguins playoff priority.  Count me as someone looking forward to an epic 1st round match-up between the Penguins and the Flyers.  So many story lines so little time.