Next opponent news – Florida Panthers: A day off before final week.

Winnipeg Free Press:  Playoff flight cancelled.  While fans may have been willing to take it easy on this team during the honeymoon phase, for players and the coaching staff (especially the latter), they had to do whatever it took to get into the playoffs as anything else meant they failed to achieve their stated pre-season goals.  Coach Noel was not happy when it was brought up mid-season that his team would be given a “free-pass” for this year.

Winnipeg Free Press:  Highlight Reel.  It was a decent effort in the 1st and 2nd periods considering it was the second game of a back-to-back.  The 3rd period was one to forget.

Winnipeg Sun: News and Notes.  Byfuglien soldiering on.  Take that buddy.  Back to the Farm.  In the Hangar.

Winnipeg Sun:  Party has come to an end for Jets.  It has been one of the best sports rides fans of NHL hockey in this province, and fans of the Jets worldwide could have possibly imagined.  While the playoffs would have been a nice bonus, it cannot detract from the season that has inspired tens of thousands in support of the reborn Winnipeg Jets. 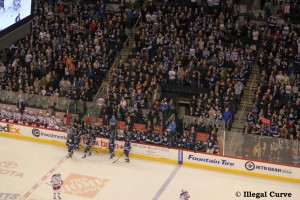 Winnipeg Sun:  Broken Glass foot ends season.  He brings a toughness and accountability to this lineup that GM Cheveldayoff would be well to get re-signed as it is an influence that could help as this team continues to develop.

Coach Noel – Too much emotion in this game.  Played on heels in 3rd.  2 games in 1.  Taking penalties in 3rd.  Should have had 4 points not 3 in 2 games.  Effort needs to be combined with intelligence.  Thorburn was fine.

TSN:  IceCaps clinch playoff spot.  On the same night that the parent club was eliminated from post-season contention, the farm team clinched their first ever playoff berth.  Congrats to all the fans in St. John’s.

Miami Herald:  A day off before final week.  With their play of late they have allowed the Capitals to get back into the race for the Southeast Division crown.  They sit just 2 points up on Washington with 4 games remaining (@ Detroit, home to Winnipeg, @ Washington and home to Carolina).