Jets news: Heart of Glass. Fan’s love of Jets carved in wood. Snapshots. Bogo in eye of Canes. News and Notes. Jets on a Deadline.

Winnipeg Free Press:  Jets have heart of Glass.  If that doesn’t embody heart and soul of a team, I’m not sure what does.  Determined to play regardess of the severity of his injury.  Unfortunately it also means that despite Chris Thorburn’s immenient return, there won’t be another GST chant this season.

Winnipeg Free Press:  Fan’s love of Jets carved in wood.  Wow that is quite an amazing piece.  Might be the most unique Jets jersey in the world.

Winnipeg Sun:  Bogo in eye of Canes.  It fulfilled the requisite sticking up for your teammate without really doing any major damage to either player as it was more wrestling match than boxing.

Winnipeg Sun:  News and Notes.  Machacek makes his case.  Byfuglien gutting it out.  Mason stays focused.  In the Hangar.

Jets on a Deadline – Jets 4 Hurricanes 3 in OT: 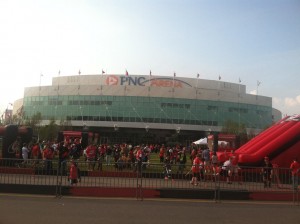 TSN:  Admirals top IceCaps to extend winning streak to 22.  The loss prevented the Caps from securing their first ever playoff berth.  Norfolk is 8 points up on the next closest team in the race for 1st overall in the AHL.

Tampa Bay Times:  Newest Bolt brings passion, athletic pedigree.  Winning the Frozen Four would be impressive back-to-back but now he has an opportunity to make an impression on Yzerman and the Bolts staff at the NHL level.

Tampa Bay Tribune:  J.T. Brown learned hard lesson from run-in with police.  Easy to say you’ve learned your lesson, but it will be upon this young prospect to show that he has what it takes to live and play in the NHL.

Globe and Mail:  Canada’s lost NHL season.  Previously it was solely a Stanley Cup drought that had Canadians wringing their hand but now in addition to this, Canadian teams are failing to even qualify for the post season.  It will be on the limited number of entries from Canadian cities (Vancouver and possibly Ottawa) to capture the spirit of Canada during the playoff!

Orange County Register:  Again, question for Ducks’ Selanne:  retire or not?  The Finnish Flash is still competing at a level players half his age wish they could achieve.  He sits 1st on the Ducks and 32nd in the league with 64 points.  And I’m sure everyone in Winnipeg would like another opportunity to salute Teemu.