TSN:  Jets fight for playoff lives on the road against Hurricanes.  The Jets had played the last 11 or 12 games with the mantra that these were playoff games and they have just run out of gas.

CBC:  Time running short for stumbling Jets.  It appears the sand had run out of the hourglass on the 2011/12 season as it is an all but a forgone conclusion that the Jets will miss the post season.  The likelihood that Washington and Buffalo stumble as badly as the Jets need them to, is next to nill.

Winnipeg Free Press:  Jets can’t coast to finish.  You have to love the candor of Glass.  While many fans have switched the conversation from playoffs to high draft pick, the professional athletes that make up the Jets are not going to mail it in for the remaining 5 games, just so this team can have a better draft position.  With 7 UFA’s heading into the summer, there remain a number of players who are playing for a bigger contract, whether with the Jets or another team for next season.

Winnipeg Free Press:  The Race.    While the Jets gave all that they could, and despite not being mathematically eliminated just yet, it is essentially over for this team.  Down by 8 points with just 5 games remaining, the chances Buffalo and Washington lose their remaining games are around the same as the Jets new chances to make the post season, 0.0%.

Winnipeg Free Press:  Jets Report.  Some news about the Jets, Canes and both rosters.

Winnipeg Sun:  Glass won’t mail it in.  He is a character guy on the ice and in the dressing room.  Always has a funny comment or three for the media during scrums.  You get the sense that he relishes the opportunity he has playing with the Jets. 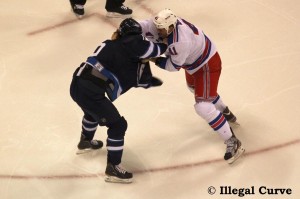 Winnipeg Sun:  For Jets players, auditions start now.  With a number of pending UFA’s and recent pick ups like Clitsome there are still 5 games in which to prove your worth to this team.

Globe and Mail:  Antti Miettinen’s incredible journey.  He has not traveled from Milan to Minsk like Rochelle Rochelle, but this has been quite the adventure for the veteran Finn who has 1 more year left on his deal.

NHL.com:  Klingberg making solid transition in St. John’s.  The high energy Swede is doing exactly what the Jets want of their prospects, making a solid contribution to their AHL club.

News and Observer:  Penalties a minor problem for McBain.  That is quite the decrease over 1 season.  In other Canes news, Cam Ward will get the start in goal tonight and Nodl, who was out after a hit in the Jets/Canes game on the 18th isn’t yet ready to return to the ice.

News and Observer:  Running out of time.  They broke the backs and hearts of Jets fans on March 18th and despite having spent the majority of the season in the basement of the Southeast, they are just 1 point back of the Jets for 3rd in the division.  Unfortunately for Canes fans their team just didn’t have enough time left in the season in which to secure a post season bid with their recent strong play, which was just too little too late.

Kingston Whig-Standard:  Captain Kirk looking good in Carolina.  Bet the Montreal Canadiens are wishing they would have had a crack at getting Muller on board their sinking ship. 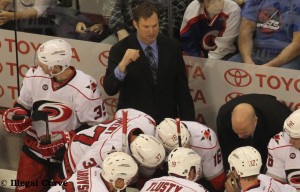