Winnipeg Free Press:  Dazed, confused, beaten.  Being closer to the basement rather than the post season has become a reality for the Winnipeg Jets.

Winnipeg Free Press:  Jets no match for Rangers.  You simply cannot afford to go 0 for 5 on the power play against the top Eastern conference team.  Even though the Rangers are ranked 5th overall, the Jets squandered their chances, including a 5 on 3 opportunity.

Winnipeg Free Press:  The Race.  Remember yesterday when the Jets chances to make the playoffs stood at 0.7%?  Well today, Jets fans are left wishing for such a lofty percentage, as the post season aspirations are down to 0.1%.

Winnipeg Free Press:  Highlight Reel.  Add last night’s game to the list of games to forget.  The Rangers are the only Eastern team who swept the season series with the Jets.

Winnipeg Free Press:  Thorburn itchin’ to return to lineup.  From the way Claude Noel spoke yesterday during his pre-game press conference it does not sound like Thorburn will return to the lineup on Friday against the Hurricanes.  Described as still being “aways away” he will likely see action in Florida and then get an opportunity to re-join his GST linemates for the April 7th finale against the Bolts at the MTS Centre.

Winnipeg Sun:  Snapshots.  Big spark missing in loss.  Good energy to start the game.  Missed early chances.  4th worst 5 on 3 % in league.  Torts was surly early.  Young guns played well.  Faceoff win % not where it needs to be.  Tortorella has amnesia when it comes to the Jets.  Could have used Thorburn last night.  Glass drops the gloves.  Pavelec could learn from Lundqvist.  Fans chant for Spencer.  Lottery watch in Winnipeg? 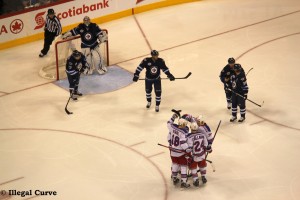 Winnipeg Sun:  Playoff hopes dead and buried.  With four road games and just one remaining at home, the inaugural season for the Jets 2.0 will see this team miss the post season.

Winnipeg Sun:  Antti’s up, finally.  Unfortunately it was too little, too late to help the Jets this season.  Defensively he contributed throughout the season.

FS Southeast:  Dan Snyder still remembered in Winnipeg.  There was a lot of talk online during the season about whether or not this award would continue to be presented and I am happy to hear that his memory will continue to be honoured by the Winnipeg Jets.


Illegal Curve:  Post-game podcast.  Host Drew Mindell and Analyst Richard Pollock break down all the action in the postgame podcast.

The Telegram:  Norfolk blank depleted St. John’s 2-0 to set pro hockey record with 21st consecutive win.  With the players they’ve lost both to injury and the Jets, the IceCaps are running on fumes as they try and close out the AHL regular season.  Good news for Caps fans, is they will likely be receiving back some reinforcements as both Nik Antropov and Chris Thorburn get set to return to the Jets lineup.