WHL: League likes the idea of a Winnipeg franchise.

Winnipeg Free Press:  Fate accompli.  While the Jets are mathematically still in the playoff hunt, things are not looking good for the league’s newest franchise.

Winnipeg Free Press:  Noel won’t slap blame on minus 11 top line for latest loss.  At this point there is no advantage for coach Noel to publicly throw his players under the bus.  Regardless of whether or not he was happy with his top line being -11, there is little chance he is not going to defend their play to some extent.

Winnipeg Free Press:  The Race.  Normally one would be upset to only have a 10 or 15 percent chance of making the post season, but the Jets are left wishing for such lofty odds.  Winnipeg is down to 0.7%, which does not exactly leave much margin for error in the remaining games.

Winnipeg Free Press:  Jets Report.  Taking a look at how both the Jets and Rangers have been trending of late. 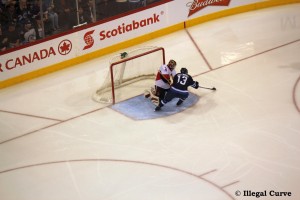 Winnipeg Sun:  Not exactly Jets’ breakout king.  You can probably expect him to take a slap shot if he ever gets another breakaway, something he is a lot more comfortable doing during a game.  He finished with over 20% of his team’s shots against the Senators.  Also some news in the article about injuries, Slater’s Masterton nod and a new Jets signing.

Winnipeg Sun:  Don’t say it’s over.  While technically it is not over until the Jets are without an ‘x’ beside their name in the standings, post season aspirations are not looking good for this team.

Globe and Mail:  Reality of missing playoffs hitting home for Jets.  While it is highly likely this team will be playing past April 7th, don’t expect this Jets squad to give up during the remaining 6 games.

CBC:  Spencer Machacek pushing for full-time spot in NHL.  He, along with his Waiver Wire linemates have forced coach Noel to take notice of his play.  Expected to help the IceCaps during their post season run.

FS South:  Conflicted Thrashers fans try to get closure.  Missed this article a couple of days ago, but a worthwhile read.  The sentiment displayed by fans of the former Atlanta Thrashers can (or should) be well understood by fans of the former Winnipeg Jets 1.0.  Fifteen years after the Jets left, there is still resentment held against the Phoenix Coyotes.

New York Daily News:  Rangers tame Wild 3-2.  Bad news for the Jets is the Rangers are one of the top teams in the East.  Good news is they played last night in St. Paul.

Newsday:  Rangers reaching playoff state of mind.  The league has to be tickled pink that the Rangers are looking like they can go deep this post season.

Brandon Sun:  League likes the idea of a Winnipeg franchise (registration required).  This does not surprise me as there has long been talk of Winnipeg being a suitable environment for WHL hockey.  For those unable to buy Jets tickets, this might prove an attractive alternative and would give True North another 36 nights of action at the MTS Centre.  From the WHL’s point of view you hit a viable hockey market and a 2nd Manitoba based WHL franchise makes travel here more cost effective.