Note II:  The Jets held a meeting in their hotel on Friday instead of hitting the ice as they prioritize rest as they got ready for the final game of the regular season tonight against the Coyotes down in Arizona as well as the playoffs to come next week.  They are set to have morning skate at 11:30 AM MST (1:30 PM CDT) so be sure to check out the pre-game report for a full update as well as audio.  Puck drop is at 9 pm CDT.

Note III:  After a practice on Friday the Moose are ready to kick off a pair of afternoon games today and tomorrow against the Stockton Heat to finish off the home portion of the 2018-19 season as they continue to push for a playoff spot.

Note IV:  Tune in for three hours of Winnipeg Jets and NHL hockey via the Illegal Curve Hockey Show on TSN 1290 Winnipeg starting at 9 am.  You can listen here.

Winnipeg Sun:  Last chance before the big dance.  Ken’s big matchup is Kyle Connor vs Clayton Keller.  His five things to watch include: 1) Oops they did it again. 2) Start fast. 3) Find the power. 4) The reunion. 5) The encore.

Winnipeg Sun:  Behind the Jets’ secret summit in St. Paul.  Paul certainly has some fun with this column.

Winnipeg Free Press:  Something is rotten in Jetsville.  (Paywall).  Wowzers.  Mike certainly doesn’t pull any punches with this article. 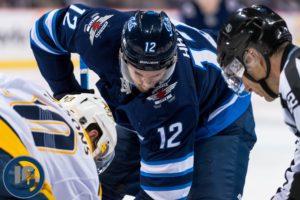 Winnipeg Free Press:  Win, place or show for Jets? Chaotic Central standings going down to wire.  (Paywall).  It has certainly set itself up to be an interesting day and we won’t know where the top stops spinning until the final buzzer tonight in Glendale.

TSN 1290 Winnipeg: Jets have the talent to go deep in the playoffs.  That’s Hockey host Gino Reda joined Andrew Paterson and Rick Ralph on the Afternoon Ride. They discussed the Jets’ play heading into the playoffs, if they can find the “on” switch, the importance of playing well towards the end of the season and their picks for the Jack Adams Award.

TSN 1290 Winnipeg: Jets need to play with consistency. TSN’s Ray Ferraro joined Andrew Paterson and Rick Ralph on the Afternoon Ride. They discussed the Jets play heading into the playoffs, how team meetings work, how hard it is to ‘flip the switch’ in the playoffs, changing the lines before the playoffs.