Note:  After an improbable 4-3 shootout win against the Rangers last night at MSG the Jets are gonna take today off and will instead get back on the ice Tuesday morning in advance of facing the Islanders in Brooklyn to conclude this three game road trip on Tuesday night.

Note II:  The Moose are back on the ice today as they try to turn things around in the midst of a six-game California road trip.  As I illustrated yesterday the Moose are dealing with a laundry list of injuries and roster moves.

Winnipeg Sun:  Jets finally solve Lundqvist, storm back for shootout win over.  It didn’t look like anything was gonna get to him but surprise surprise the Jets lethal pp was the catalyst.

Winnipeg Free Press:  Jets on right side of blown lead with 4-3 comeback win in New York.  (Paywall).  The Jets finally flipped the script and found themselves on the right side of things with that final frame.

CBC:  Scheifele’s point streak paying off for Jets.  The chemistry on display between 55 and 26 is quite remarkable. 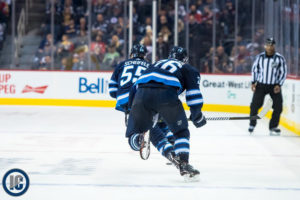 Newsday: Rangers squander 3-0 lead, lose to Winnipeg Jets in a shootout at MSG.  The home side was coming off a disappointing loss the night before to the Habs so they must have been feeling pretty good after 40 minutes.  Always interesting to read the comments of the Jets opponent post-game.

New York Post: Henrik Lundqvist stands alone in remarkable Vic Hadfield tribute. King Henrik was the reason that game was in extra time as the Jets poured everything they had at him in the first 40 minutes but the dam refused to break. Check out another recap from a beat writer that covers the Blueshirts.

TSN: Hellebuyck has to be better for the Jets.  Despite an impressive come-from-behind win over the Rangers, Connor Hellebuyck walked away with an .842 save percentage and as Craig Button explains, the reigning Vezina trophy finalist will need to be better if the Jets plan on having success this season.

Topics: Erik Karlsson returns for the first time to Ottawa as a member of the San Jose Sharks, Logan Couture criticizes performance of his San Jose Sharks, Jets recall Nelson Nogier from the Manitoba Moose, Mason Appleton set to make his NHL debut against the Devils, The William Nylander saga is nearly over.