Jets top centre is the First Star of the Week in the NHL. 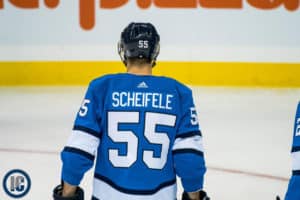 Scheifele shared the League lead with five goals and ranked second overall with eight points in four games (5-3—8) as the Jets (16-8-2, 34 points) picked up three wins to move into third place in the Central Division. Scheifele potted two goals in a 4-3 loss to the Pittsburgh Penguins Nov. 27. He then matched a career high with three assists in a 6-5 victory over the Chicago Blackhawks Nov. 29. Scheifele capped the week with back-to-back decisive goals, scoring twice (including his fifth career overtime tally) in a 4-3 triumph against the New Jersey Devils Dec. 1 and then recording one goal in regulation as well as his fifth career shootout winner in a 4-3 victory over the New York Rangers Dec. 2. The latter completed a three-goal, third-period comeback for Winnipeg, the sixth such win in franchise history (and first since Oct. 19, 2016 vs. TOR). The 25-year-old Kitchener, Ont., native ranks 11th in the NHL with 16-16—32 in 26 contests this season, including 19 points in his past 12 games (10-9—19).