Note:  The Jets are looking to go a perfect 3-0 on this three game road trip with the final contest getting underway in Brooklyn tonight as they face the Islanders.  Winnipeg took Monday off so we won’t know if there are any lineup changes until morning skate.  Be sure to check out the pre-game report which will be updated when the Jets take the ice for AM skate ahead of the 6 pm puck drop.

Note II:  Another day of practice for the Moose today in Bakersfield as they continue to prepare for the fourth game of this six-game California road trip which is tomorrow night at Rabobank Arena.  The Moose are dealing with a laundry list of injuries and roster moves and it will be interesting to see what changes they have in place before the game with the Condors.

Winnipeg Free Press:  Scheifele a shrewd, shifty sharpshooter.  (Paywall).  When he sets up in front of the net on the power play he has become almost automatic. His shot has certainly gotten better and better as he continues to strive to be one of the top players in the NHL. 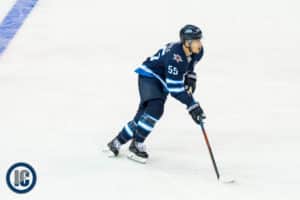 Winnipeg Free Press:  Roslovic, Moose buddy Appleton bring buzz to fourth line with Perreault.  (Paywall).  As I discussed when he was first recalled it was pretty clear in November of 2017 that these two players (as well as Nic Petan) had a remarkable chemistry.

Winnipeg Sun: Jets look to keep it rolling after back-to-back wins in.  Ted’s big matchup is Nick Leddy and Johnny Boychuk vs Blake Wheeler and Mark Scheifele. His five keys to the game include: 1) Who gets the net? 2) Laine is due. 3) Heavy minutes for Trouba, Morrissey and Myers. 4) 4th line production. 5) New York Islanders.

Winnipeg Sun: Scheifele rising to new heights as trigger man for Wheeler.  Speaking of chemistry it is clear that 55 and 26 have it in spades.

The Hockey Writers: Q & A with Josh Morrissey. Little chat with one half of the Jets top pairing D tandem.

In the eighth episode of Ground Control, JetsTV’s Jamie Thomas and Tyler Esquivel are joined by TSN’s Kevin Sawyer from New York City. Sawyer discusses his days in the NHL, his new career as a broadcaster and much more.

Kevin Woodley of InGoal Magazine joined Andrew Paterson and Rick Ralph on the Afternoon Ride. They discussed the increased scoring in the NHL this year and Connor Hellebuyck’s performance.