Note:  The Jets and Capitals played an unusual game from start to finish last night here in Winnipeg.  In fact it began pre-game when the Caps announced they would use a local Winnipegger as their emergency backup with original starter Braden Holtby a late scratch forcing backup Pheonix Copley into the starter’s spot.  After a bad 1st period the Jets pulled off their third straight win at Bell MTS Place defeating the defending Stanley Cup champs 3-1.  Today they are scheduled to hit the ice for a 12 pm practice at Bell MTS Place as they prepare to conclude this four game home stand tomorrow night against the Sabres.  Be sure to check out the Winnipeg Jets Practice Report at noon to get fully up-to-date.

Note II:  The Moose are in the midst of a four-game road trip which saw them improve to 1-1 after last night’s 5-4 win over the Stars in Cedar Park, Texas.  Manitoba’s second line of Vesalainen (1G 1A) Shaw (2G 1A) & Lipon (2A) drove the bus while Appleton had 1A as he continues to lead the team in points with 15 (7G 8A). Eric Comrie with 26 saves in the win (5th win in last 7 games).  Today they leave Texas and travel to Michigan as they get set to renew hostilities with the Griffins in Grand Rapids on Saturday.  There was a report this morning that Vesalainen’s KHL rights were bought by Jokerit but still no word as to a change in the status of the Jets 1st round pick in 2017. 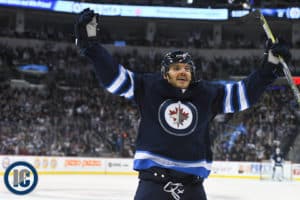 Winnipeg Free Press:  Bisons goalie coach gets called up – way up, to the NHL.  (Paywall).  What an amazing story.

Washington Post: Minus Braden Holtby and Evgeny Kuznetsov, Capitals fall to Jets.  Always good to get a read on the game from someone who covers the visitors.

NHL: Weary and undermanned, the Caps put forth a valiant effort in the second of back-to-backs. Another good read from someone who covers the Capitals.

NHL:  Wheeler extends point streak in Jets win against Capitals.  Jets captain has been on fire setting all sorts of records as he continues to lead his team to win after win.

Sportsnet:  Why looking beyond Blake Wheeler’s production reveals tough start.  Andrew looks at what the numbers reveal about the captain’s season to date.