Might the Jets 2017 1st rounder be heading back to Europe? A report out of Finland suggests the answer is maybe. 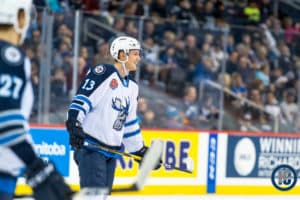 Winnipeg Jets 1st round draft pick Kristian Vesalainen spent most (44 games) of last season with HPK Hameenlinna of the Finnish Elite League with a few games played for Karpat (5). This past August he was signed by the Jets to a three year entry-level contract.

Vesalainen made the big club out of training camp but after five games with Winnipeg he was assigned down the hall to the Manitoba Moose of the AHL.  In his first 2 games with the Moose he had 4 assists and in his last three games he’s added 3 goals and 1 assist to give him 8 points in 8 games.  Manitoba is on the road right now and Vesalainen played a big role in last night’s 5-4 win over the Stars.  Playing down on the farm is giving him plenty of opportunities he wouldn’t be getting with the big club including top six minutes and plenty of power play time.

There were reports that he has an out clause in his contract that would allow him to return to Europe.  I’ve had fans asking me of late whether there is any time limit associated with this clause.

Which of course now has everyone is Winnipeg scrambling to verify the veracity of said report. As of right now Kristian Vesalainen is with the Moose and traveling to Grand Rapids, Michigan where the team will take on the Griffins on Saturday night.