Note:  The Jets practiced today in Finland after a day off on Monday as they prepared to face the Panthers in a pair of games in the Global Series in Helsinki later this week.

Note II:  The Moose end the three-game road trip with a game against the Admirals today in Milwaukee as they look for revenge for a loss on Friday by a final score of 4-1.  Today they have morning skate at 11:15 am with puck drop at 7 pm at UW-M Panther Arena.

Winnipeg Sun: Laine’s talent evident from beginning as Jets sniper showed growth on road to NHL.  A look at what the Jets GM saw from the young Finn.

Winnipeg Sun: Winnipeg Jets coach Maurice following the code.  While they may be chummy in normal circumstances during the season things are different.

Winnipeg Free Press:  Maurice had a positive Finn-ish in previous NHL series.  (Paywall).  This isn’t his first time at the rodeo.

Winnipeg Free Press:  Patrik Laine’s slow production has Finnish fans scratching their heads.  (Paywall).  After what we’ve seen in two seasons from him I don’t think it is time to hit the panic button.

Winnipeg Free Press:  Vesalainen, Niku stuck on the outside looking in.  (Paywall).  Missed this one from yesterday on the pair of Finns who were left at home.

NHL.com:  Andrew Copp discusses adjusting to time change, exploring Helsinki.  The Jets forward is blogging about his experience in Finland. 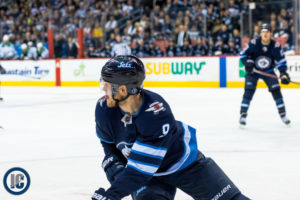 NHL.com: Laine ‘almost like’ Selanne in Finland, Numminen says. Teppo Numminen’s smile has not diminished in the nine years since one of the NHL’s smartest and most reliable defenseman retired.