Note:  The Jets arrived in Finland on Sunday after traveling overnight from Toronto.  We heard from Patrik Laine, coach Maurice and GM Kevin Cheveldayoff.  Today the team is off and they will be hitting the ice for practice at Hartwall Arena on Tuesday.

Note II:  The Moose finally picked up their first road win as they beat the IceHogs in Rockford 2-1 in a shootout last night.  Tye McGinn scored his first of the season, Seth Griffith got the shootout winner and Mikhail Berdin picked up a win in his first AHL start.  Manitoba is scheduled to practice in Milwaukee as they prepare for a re-match with the Admirals tomorrow night to wrap up the three game road trip.

Winnipeg Sun: Jets Snapshots. Includes: 1) Jets lament loss to Maple Leafs. 2) Business trip (with a side of bonding). 3) No concern about.

Winnipeg Sun: Jets touch down in Finland with Patrik Laine eager for games in home country.  I suspect it is gonna be nuts on Thursday when the game kicks off.

NBC Sports:  What is wrong with Patrik Laine?  A look at the Jets sniper’s start of the season. 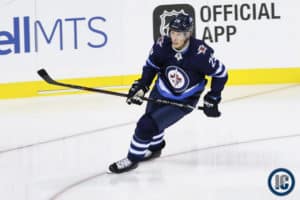 TSN: Laine ready for busy, but fun week at Global Series in Finland. The Jets arrived in Finland on Sunday as they prepare for two games against the Panthers in Helsinki on Thursday and Friday. Patrik Laine said he’s been waiting for this since he found out the Jets were taking part in the Global Series and he expects a busy but fun week.

Topics: Jets/Red Wings recap, The early season struggles of Patrik Laine at 5-on-5, Jets/Maple Leafs rematch, Are the Jets relying too much on their ability to flip the switch late in games