Check out the latest from the Jets practice out at Hartwell Arena in Finland as they prepare for the Global Series. 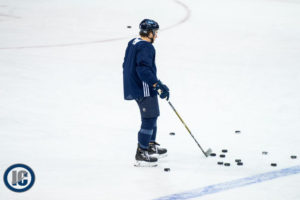 The Jets had the day off on Monday but were back to work today in Finland as they prepare to kick off the Global Series against the Florida Panthers on Thursday.

Coach Maurice:  On Connor Hellebuyck’s game and whether anything concerns him.  What went into the decision to move Andrew Copp to the middle?  Comparing Barkov and Laine.  On his reluctance to breakup the TLC line.  Does he expect Laine to show Barkov who is the daddy in Finland?  How does he see Laine’s future over the next five or six years?

The Jets are scheduled to practice on Wednesday as preparation for the Global Series continues. As always stay tuned for the latest Winnipeg Jets news by keeping it locked to illegalcurve.com and on social media including Twitter | Facebook | Instagram.  And you can follow me on twitter as well (@icdave).