Note:  The Jets had until 5 pm ET on Monday to qualify their RFAs and for 12 of the 16 on that list they received that from Winnipeg.  Four did not including Joe Morrow although technically the Jets could still sign these guys if they so desired.

Note II:  After medicals/testing that was closed to the public on Monday today the on ice portion of Jets Prospect Development Camp gets underway at the IcePlex.  The forwards will skate at 10:45 am while the defenceman will go 11:50 am.  Here is the roster of participants as well as the schedule for the entire week.

Winnipeg Free Press:  Jets make qualifying offers to 12 RFAs; pass on four, including Morrow.  (Paywall).  I wasn’t surprised by Lodge or Kotalek but I didn’t think Phillips or Morrow wouldn’t be qualified. 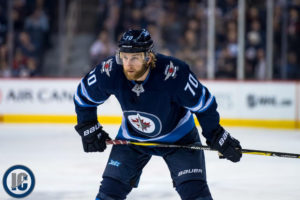 Winnipeg Sun: Game 1 hero becomes unrestricted free agent.  His was the most prominent name on the list of RFAs not qualified by the Jets yesterday.

NBC Sports: Winnipeg’s Paul Stastny problem. Seems to be the topic on everyone’s mind these days.

Sportsnet:  31 Thoughts.  Number 11 deals with the Jets and what it could take to make room for Stastny.

TSN: Without the cap room at this point, can the Jets bring back Stastny? In a perfect world, the Jets would love to hang on to Paul Stastny, but can they make it work? Craig Button and Pierre LeBrun share their thoughts, and discuss possible landing spots for top UFA goalie Carter Hutton.

TSN 1290 Winnipeg: Gustafsson is mature beyond his years. Winnipeg Jets director of amateur scouting Mark Hillier joined Andrew Paterson and Rick Ralph on the Afternoon Ride. They discussed sitting through the first round without a pick, putting together the final draft rankings, the strategy involved when making a selection, last year’s first round pick Kristian Vesalainen, and what attracted him to Jets 2018 draftees David Gustafsson, Nathan Smith, Declan Chisholm, Giovanni Vallati, Jared Moe and Austin Wong.