A look at Day 1 of Jets Development Camp. 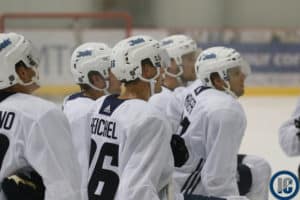 The Jets hit the ice for the second day of Prospect Development Camp but the first day with scheduled skating for the young players.  The forwards were first up followed by the defence.

Following the skate a number of players spoke:

Jets GM Kevin Cheveldayoff held a media availability this afternoon to look back at the draft, talk about the prospects, his RFAs and free agency.

Jets GM Kevin Cheveldayoff:  Thoughts on getting the prospects together for Development Camp.  Status of Kristian Vesalainen? Thoughts on the season he had in Europe. On Vesalainen playing in North America this season. Status of Skyler McKenzie and Nathan Smith. On Smith’s route to hockey. Qualifying his RFAs and the decision to not qualify Joe Morrow. On the other three players (Phillips, Lodge & Kostalek) not qualified.  Is the plan for Berdin to be with the Moose this season?  What’s the week like for him as he builds for July 1st?  How would he describe the communication with Stastny’s side?  On whether multiple players filing for arbitration could be a good thing because they can control contract lengths.  Reflecting on the season that Mason Appleton had with the Moose.  Does he have a sense that Stastny wants to return?  Does he get a sense that the Stastny deal doesn’t get done until after the Tavares deal gets done?  How much headway does he get done before July 1st?  Is this one of the more challenging summers because of the number of the RFAs they have?  On Sami Niku’s absence from camp.  The season that Dylan Samberg had.