Jets news: Familiar faces. Scoring, power play chances on the wane. It was a magic puck. One dubious slashing call and game a barn burner. Having a healthy attitude. Bogo could be out.

Affiliate news – St. John’s IceCaps: Rookie John Albert can only watch as he recovers from a concussion.

Note:  Jets have re-assigned Aaron Gagnon to the IceCaps.

Winnipeg Free Press:  Scoring, power play chances on the wane.  Coach Noel has certainly gotten his team playing a lot more responsible as can be seen in the dramatic drop in power play opportunities they hand the opposition.

Winnipeg Free Press:  It was a magic puck.  Sometimes a little lady luck is just what a team needs to turn around its season.  The Jets were given a golden opportunity in Washington and they could not afford to squander it as chances like that do not happen very often.  Today in Pittsburgh it is going to take hard work to beat the 6th ranked Pens who are 15-7-2 at Consul Energy Center.

Winnipeg Free Press:  One dubious slashing call and game a barn burner.  You have to play with the hand that you are dealt.  This team needs to kick up the scoring, because it appears they are playing playoff style hockey 2 months before the post-season begins, and that seems unsustainable.

Winnipeg Sun:  Jets have healthy attitude.  The players understand that luck sometimes factors into a game but know they cannot rely on this for more than the occasional odd victory.  The Jets still need to figure out how to score at even strength and they are going to need to start by proving same against the Penguins.

Winnipeg Sun:  Jets could lose Bogosian.  Losing Bogosian for any length of time during this critical stage in the season is not something the Jets could afford.

Illegal Curve:  2011 NHL Entry Draft Prospect stats.  We have updated our prospects stats to all games as of February 10th.

The Telegram:  Rookie John Albert can only watch as he recovers from a concussion.  Albert made a very mature decision for a young guy, he spoke up about his headaches rather than keeping it to himself and trying to play through it.

Pittsburgh Post-Gazette:  Fleury to start today.  The last time he faced the Jets back in December he cruised to an easy 4-1 victory only facing 19 shots. 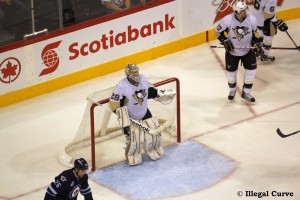 Pittsburgh Tribune-Review:  Staal likely to play today after month long absence.  While he might have some rust on his skates, the Pens addition of Staal and the Jets possible loss of Bogosian is not arithmetic that Jets fans are going to like adding up.