Winnipeg Free Press:  It was Pens vs. pencils.  The Jets tried to play run and gun with a team that has a much bigger gun and as could have been expected, they lost big time.

Winnipeg Sun:  Bright spot in Jets defensive disaster.  The 4th line continues to work hard and prove their worth.  While they did not play a ton during the game (between 10 and 11 minutes) the line of Burmistrov, Stapleton and Miettinen contributed as best they could with what they had to work with.

Winnipeg Sun:  Jets leave Pavelec out to dry.  He clearly does not like playing in Pennsylvania but there really wasn’t an excuse for yesterdays game.  While I’m sure he would have liked to have that first Penguins goal back, he was just left to defend all too often by himself as the Jets were often caught by the cagey Penguins team giving them odd man rushes.

The Chronicle:  Rink atmosphere helps home teams.  There is little doubt that a return to the MTS Centre is just what the doctor ordered for this team.  They play 9 of the next 10 at home (and the 1 on the road is in St. Paul, Minnesota) so the Manitoba crowd will have a chance to play that 7th man on the ice role. 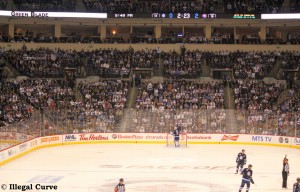 Beaver County Times:  More Canadian-based teams makes little sense.  The standard “Why would the NHL leave the 8th largest US market for the 8th largest Canadian market” with little analysis aside from the standard boggeyman answer of ‘What happens if the Canadian economy tanks?’.  While we could go on and on about how the Jets 2.0 are vastly different from the Jets 1.0 or about the Manitoba economy, the fact is most of you who are reading this are well aware of the differences.

Illegal Curve:  Jets on a Deadline – Penguins 8 Jets 5. Game recaps, video highlights and the NHL.com 3 Stars of the night.

Winnipeg Free Press: Jet lands, parents proud.  I am all for Jets mania, but what is next, naming your kid 7 because Mickey Mantle was your favorite baseball player?  (Kidding…trivia time:  what show is the above name from?).  Congrats to the parents who show that Jets mania knows no bounds.

TSN:  Lehner’s 44 saves not enough as IceCaps edge Senators.  Don’t look now but the team that couldn’t win at home is suddenly winning at the Mile One Centre. Their victory last night was the 3rd in a row at home and has them 8-2-0 overall in their last 10 and sitting in 1st place in the Eastern Conference.

Newsday:  Islanders beat Kings 2-1.  The Islanders are 7-2-2 in their last 11 games and slowly trying to creep back into Eastern conference contention and sit just 8 points back of 8th place Toronto.

Newsday:  Parenteau hoping to remain an Islander.  Part of what makes February so difficult is the need for players to continue to play well but that spectre of a potential trade looming over can sometimes overshadow them.

Newsday:  Big-time memories as Coliseum turns 40.  While the building has a lot of history, as my baba would say ‘what was, was’ and it is time for the fans on Long Island to get the Charles Wang promised new rink sooner rather than later.