Winnipeg Free Press:  Wellwood back at practice; Stapleton might also return for Pittsburgh game. Looks like the AAA line will get reformed as Gagnon is expected to be sent back to the IceCaps.  Bogosian remains a game time decision after he blocked a shot and was forced to leave the Capitals game.

Globe and Mail:  Rethinking the NHL’s annual trade deadline.  The always informative Eric Duhatschek with a great read on the changing mentality surrounding trade deadline day.  He also touches on a number of other topics from around the NHL.

Winnipeg Free Press:  Lady Luck to the rescue.  At the end of the day the Jets can put a W in the column instead of an L and most will not remember how this was achieved at the end of the season.  Some of the IC crew was watching the game at The Cheer and the look of shock on the Jets fans faces when Big Buff took that shot from center and scored was one of disbelief.  While most left The Cheer with a smile on their face, Lauren who entered the Budweiser contest, walked out with a Jets jersey.  (No word if Randy Jones has changed his name to The Cheer). 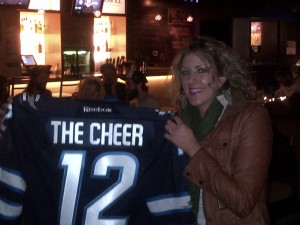 Winnipeg Free Press:  Chipman takes umbrage with author.  Chipman has a right to be aggravated.  These reports/studies get the flashy headline “Canada could support 9 teams” but at the end of the day they are based on theory and are purely the hypothesis of the authors.

Winnipeg Free Press:  Iffy call sparks action.  The refs were certainly having some fun last night.  Luckily for Jets fans they evened it up late and the Jets were able to capitalize.

Winnipeg Sun:  Flu bug plays havoc with Jets.  When the game moved to the shootout, there was concern that missing Wellwood would hurt the Jets chances to win since he has the highest % of shootout success on the team.

Winnipeg Sun:  Snapshots.  Digging themselves out of mess.  Three points from first.  Different headlines with 4 minutes to go.  Jets AAA line.  Awful 1st periods.  Pavelec drives the bus.  What to do about Ladd.  Lack of penalty shot on Wheeler’s play.  Antropov needs to be more involved.  Pavelec so much better than stats suggest.  Ovechkin pass was sick.  Good shootout performance.

Winnipeg Sun:  Pavelec has no love for shootouts.  He might not love them but last night’s victory was monumental in keeping the Jets in the race for the Southeast division crown.  A number of the other teams in the Jets division got points (Wsh shootout loss, Fla won, TB lost in OT) so a loss last night, considering most teams have games in hand on Winnipeg would have been disheartening.

Illegal Curve:  Jets on a Deadline – Jets 3 Capitals 2 in shootout.  Game recaps, video highlights and the NHL.com 3 Stars of the night.

TSN:  Staal to play this weekend.  It has been a month since he last played.  Should be interesting to see if he can have an impact for the Pens.

Pittsburgh Tribune-Review:  High-ankle sprain sends Kennedy back to bench.  Never an easy injury, looks like the Pens will lose his services for at least a month.

Pittsburgh Post-Gazette:  Despres hopes to return soon, but where?  Looks like the Penguins will have to wait a bit longer to see if this young prospect will be ready to show his worth at the NHL level.

Pittsburgh Post-Gazette:  Empty netter assists.  If it is Penguins related, Seth Rorabaugh has it covered in this informative column.