Next opponent news – Washington Capitals: Alex Ovechkin has made ice hockey cool for Washington’s area youth. Ward’s first year with the Capitals has been a little uneven. Orlov is taking on look of veteran defenceman.

Winnipeg Free Press:  Veteran Thorburn says closely knit club well worth keeping together.  If you want to hear the players thoughts on being traded we have the audio from practice the other day in which they discussed same.  (Thorburn and Glass were asked about it).  Ed also talks Caps watch, Jets defence, a quotable coach Noel moment, and pizza day.

Winnipeg Free Press:  Jets target Capitals in crucial matchup.  Look at how tight the Southeast is.  The margin for error remains slim, so the Jets need to play well over the next four games (3 on the road, 1 at home).  If they can, they then face a favourable 8 games in a row at the MTS Centre.

Winnipeg Sun:  NHL’s elephant in the room.  It is the thing nobody in the room wants to talk about.  Most of the players won’t really react when asked about trades or the possibility of trades and the truth is what answer can they really give.  The decision is made by GM Cheveldayoff and his team.

Winnipeg Sun:  Flu bug keeps Jets away.  Most of the Jets (the healthy ones) were hosted by former Manitoba Premier and current Ambassador to the United States Gary Doer at the Canadian Embassy. 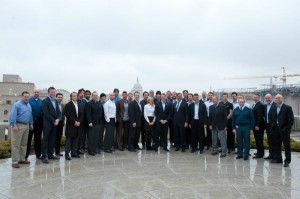 Winnipeg Sun:  Kane brings smiles with visit.  Good move by Kane and the Jets to get the focus on the positive impact the Jets can have in the community.

The Telegram:  IceCaps clip Bruins in overtime.  While the Caps have not played particularly well at home before this 6 game homestand began, they have gone 3 and 1 since it started and moved into 1st overall in the AHL.  Unfortunately they too are suffering from the flu bug as well as injuries and might need some reinforcements for this weekends contest against the baby Senators.

Washington Post:  Alex Ovechkin has made ice hockey cool for Washington’s area youth.  Much like the Gretzky factor in California, over on the East coast, the ‘Ovi’ factor has had quite the positive impact on youth hockey in and around the Washington, D.C. area.

Washington Examiner:  Ward’s first year with the Capitals has been a little uneven.  Which just goes to show you that throwing money at a player will not always solve your problems  Three million per season and he has only 1 goal since November 5th.

Washington Times:  Orlov is taking on look of veteran defenceman.  Sometimes throwing players directly into the NHL fire can have disastrous consequences on their development, and other times, as appears to be the case with young Dmitry Orlov, it was just what he needed.