CBC:  Jets look to build with big road games.  With only 4 points separating the 3rd place Jets and 1st place Capitals in the Southeast, tomorrow night’s game in Washington is quite important.  The Jets are looking to avenge the 1-0 loss to Alex Ovechkin and the Capitals back on December 15th.

Toronto Star:  Evander Kane tries to improve his image.  Is this a Winnipeg thing?  Would speculation happen in other Canadian cities?  Couple that with this being a new team and you have a recipe for the type of hype/rumours that have spread like wildfire.

Winnipeg Free Press:  Little’s luck all Jets need.  Lucky #13 for Bryan Little turned out to be the game winner after some hard skating by his linemate Blake Wheeler.  The Jets have to focus on winning the Southleast™(Neil Greenberg, Washington Post) if they want to talk playoffs.  Huge game on Thursday in Washington. 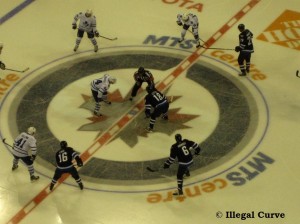 Winnipeg Free Press:  Kane needs to avoid smoke, start creating fire on ice.  Can the Jets sniper turn his season around?  There is still plenty of time and opportunity for Kane to prove his worth to this franchise.

Winnipeg Free Press:  NHL considering Winnipeg as future site of Heritage Classic.  With the building of the new Investors Group Stadium, it is a perfect storm of circumstances for the newest Canadian franchise to host the Heritage Classic.  My only question, for the Old timers game, supposing the Jets play the Oilers, do we have Dale Hawerchuk facing off against Wayne Gretzky or Patrik Stefan?

TSN:  Pasquale’s shutout leads IceCaps to victory over Bruins.  Impressive win for the Caps who only dressed 11 forwards due to injury.

Washington Post:  Caps strike and take over first.  While the Jets would not want to see Ovi heating up, it is good that the Caps got a clean win against the Panthers.  Huge game on Thursday.

Sportsnet:  Quebec ready for Nordiques return.  If you are in Quebec City and are interested in Making it Eight, then here is a pretty, pretty, pretty good read for you.