CBC:  Dedicated to closing gap on Panthers.  The Panthers are sitting in 1st place in the Southeast, 3 points up on the Jets with 3 games in hand.  The Jets can ill afford to lose games like these, especially given the fact that they have already lost 2 to Florida this season.

Winnipeg Free Press:  Byfuglien has huge impact on return.  Even though coach Noel says he wants to ease his returning players back into the games, the same thing happened with Enstrom/Bogosian/Hainsey when they returned from injury.

Winnipeg Free Press:  Byfuglien’s case sets course for courtroom.  Not surprised a defense attorney is confident that he will win.  I’d be worried if he said anything other than that quite frankly.

Winnipeg Sun:  Buff makes big impact.  It isn’t just fans who are excited to see the big man back on the blueline (or redline, or behind the opposition goaltender) as his teammates are equally excited to have him back on the ice. 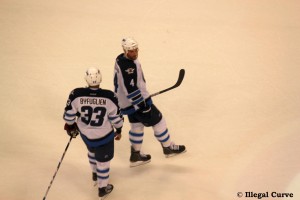 TSN:  Jets finally get back-t0-back wins on the road.  Now if they could only do it on consecutive nights!!!  We will see tonight if the Jets can do so for the first time this season.

Illegal Curve:  Jets on a Deadline – Jets 2 Lightning 1 in OT.  Game recaps, video highlights and the NHL.com 3 Stars of the night.

Metro News:  Weather won’t hamper snow sculptor’s work.  He is paying homage to the Jets and Bombers.  Expected to be completed by today.

The Telegram:  Sharks’ Sommer got Bialowas his first job in pro hockey.  While they may be appreciative of what he did for hockey on the East coast, I’m sure they are hoping he gets his 500th win somewhere else.

The Telegram:  IceCaps not alone in trying to be better at home.  The Caps start a 6 game homestand tonight so they will have plenty of opportunity to improve on their poor home record at Mile One Centre.

Miami Herald:  Mikael Samulesson healthy and helpful.  It was pretty obvious that he was healthy when he scored the shootout winner against the Jets last week.

Miami Herald:  Panthers get load from Broward County.  Sometimes you have to forget about appearance in the quest to make money for your business.  If this will generate revenue for the team you cannot be too concerned as to how it might appear on television.