Note: Tune into the Illegal Curve Hockey Show which starts at noon until 3 pm today on TSN Radio 1290. Guests include Neil Greenberg (Washington Post), Pat Hickey (Montreal Gazette) and IC’s Ezra Ginsburg who is live and on location in Montreal. In addition to the interviews the guys will talk about last night’s Jets/Panthers game, discuss the Jets schedule, preview tomorrow’s Jets/Habs game as well as a discussion of a wide ranging number of topics from across the NHL. We welcome your questions/comments. Send us tweets to @illegalcurve.

Winnipeg Free Press:  Ministry of Trade.  As will 750,000 Peggers’ who all would like to add their 2 cents as to what moves this Jets team needs to make.  We have to ask ourselves,  do we want short term reward or do we have long term vision?  With the former we could see the Jets make some moves to sneak into the playoffs.  With the latter the Jets likely finish outside, but acquire assets that could ensure future success.

Winnipeg Free Press:  One and done.  Unfortunately this team isn’t exactly blessed with 30 goal scorers, in fact they have yet to have any player crack 20, 53 games into the season.  But as coach Noel accurately states, this team is too often looking to make the pass when they can take a shot on net.

Winnipeg Sun:  Spirited tilt turns tide temporarily.  Fans may ask why we have a guy like Chris Thorburn on the team, but his teammates never do.  He isn’t afraid to stand up for one of the guys or as the case was last night, give the team a boost by engaging in some fisticuffs.  While he only has 1 goal this season, he has averaged 6 goals a season over the past 4 seasons, so he can also help out in that area. 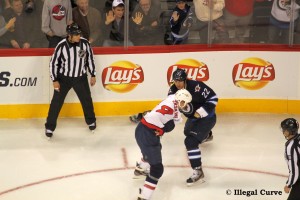 Winnipeg Sun:  Snapshots.  Back-to-back blues.  Lack of scoring.  Jets could use a Little streak.  Good and bad Little yesterday (As an aside:  Kudos to Ken for accurately predicting that Little would break his slump yesterday).  4th line brings life.  Too many passes.  Mason was sharp.  Killer 1st period.  Poor penalty calls.

Globe and Mail:  Jets still looking to crack back-to-back riddle.  O wins and 9 losses pretty much says it all.  If you watched that 3rd period you saw a very tired Jets team.  You also saw a team playing its 3rd game in 4 nights  so that is not unexpected.  During the final 3 or 4 minutes of the 3rd down a goal, the Jets just couldn’t get anything going.  The team is off to Montreal to try and cap off this road trip with a much needed victory.

Illegal Curve:  Jets on a Deadline – Panthers 2 Jets 1.  Game recaps, video highlights and the NHL.com 3 Stars of the night.

TSN:  Clark scores in second period to life IceCaps over Sharks.  The Winnipegger got the game winning goal in the 2nd and helped the Caps get off to a good start to their home stand.

Washington Post:  Alex Ovechkin set to return to Capitals lineup in Montreal.  There will be a lot of Jets fans cheering for the Habs today as they do not want to see their Southleast (as guest on today’s Illegal Curve Hockey Show Neil Greenberg calls it) foes get any more points.

Montreal Gazette:  Struggling Canadiens get a visit from a psychologist.  Tied with Carolina for last in the East it hasn’t exactly been a banner season in Montreal.  This team needs to do whatever it can to try and get itself out of their current funk.

Montreal Gazette:  Joel Rechlicz won’t play today.  Appears that Rene Bourque is safe as the Caps won’t be playing their tough guy in today’s matinee with the Habs to exact some revenge for the hit that knocked out Backstrom.  You can hear more from Gazette reporter today on the Illegal Curve Hockey Show as he joins the guys to talk about tomorrow’s Jets/Habs game.