Note:  The 1st round of the NHL Entry Draft goes tonight in Chicago at 6 pm CT.  Our correspondent Ezra Ginsburg is down in the Windy City and will be part of the complete coverage provided by voice of the Jets on TSN 1290 Winnipeg Paul Edmonds and host of the Afternoon Drive Andrew ‘Hustler’ Patterson.

Note II:  On Thursday Jets GM Kevin Cheveldayoff spoke for just over 20 minutes about the Expansion Draft, Enstrom, a goalie search, the Entry Draft and more.  Give it a listen here.

Note III:  Jets fans also learned what the full regular season schedule for Winnipeg looks like.  And we even got some post reveal analysis from Drew Mindell.

TSN 1290 Winnipeg:  No trade clauses are a reality of Cheveldayoff’s job.  (audio).  Tim Campbell of NHL.com speaks to Rick Ralph about his impressions of the expansion draft in Las Vegas, the Winnipeg Jets trade with Las Vegas to ensure Toby Enstrom was not selected and how no trade clauses limit GM Kevin Cheveldayoff’s ability to make trades.

Winnipeg Sun:  Jets GM Cheveldayoff thankful Enstrom took one for the team.  According to the GM the organization owes a debt of gratitude to the veteran defender. 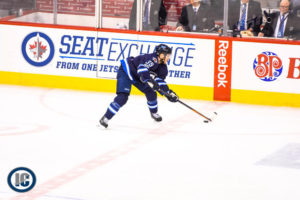 Winnipeg Free Press:  GM rolled dice on Enstrom.  (Paywall).  It wasn’t set in stone and that had to be disconcerting for the Jets brass.

Winnipeg Free Press:  Jets release 2017-18 schedule; bet heavily on Jets jerseys in Vegas Nov. 10.  (Paywall).  That was the first game I looked for when the schedule was released on Thursday.

Metro News:  What happened in Vegas… wasn’t actually that bad.  Compared to some of the other NHL teams the Jets didn’t do too badly in Sin City.

TSN 1290 Winnipeg:  Comfortable in our list going into first round.  Jets GM Kevin Cheveldayoff joins the Afternoon Ride to discuss the trade made with the Vegas Golden Knights at the expansion draft, how the expansion draft process changed over time, and moving down to the 24th overall pick in the 2017 draft.

Illegal Curve:  Kevin Cheveldayoff pre-draft chat.  Topics with the Jets GM included – Going through the Expansion Draft process.  How does he think he and the management group handled the Expansion Draft?  Was there some incentive to Enstrom?  Once Enstrom agreed did he turn his attention immediately to a deal with Vegas?  Did he feel like it wasn’t going to be too painful a process once he made decision to pay the price?  When Enstrom waived was there any protection for him?  On the deal with Vegas.  On the price they paid to Vegas.  On when the deal with Vegas went down?  Given the nature of the draft does he have hope that they can get a similar player at 24 that they would have at 13?  Being able to find a good player at 24.  On how the process went yesterday.  On his search for a Jets goalie.  Now that the Expansion Draft has passed can he be more aggressive in his search for a goalie?  Can he be active between today and tomorrow?  On GMs being “held hostage” during the Expansion process.  On the player awards and Laine being up for the Calder.  On considering an extension with Enstrom.