Winnipeg Jets to induct Dale Hawerchuk into their Hall of Fame

Ducky will be inducted into the Jets Hall of Fame. 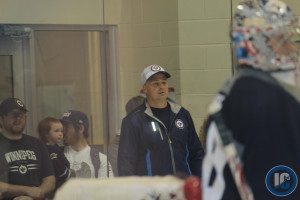 He’s been connected to both Jets franchises and it comes as little surprise that he will be inducted into the Hall of Fame.

Dale Hawerchuk will be honoured at a special Hall of Fame induction ceremony prior to the Arizona Coyotes vs. Winnipeg Jets home game at Bell MTS Place on Tuesday, Nov. 14 at 7 p.m.

Dale Hawerchuk was traded to the Buffalo Sabres on June 16, 1990 and went on to notch his 1,000th NHL point on March 8, 1991 and would later become the only player in NHL history to skate in 1,000 games before he turned 31-years-old. Hawerchuk retired in 1997 with 1,409 points (518G, 891A) in 1,188 career regular season games and another 99 points (30G, 69A) in 97 career playoff tilts. He was inducted into the Hockey Hall of Fame in 2001 and is an honoured member of the Manitoba Hockey Hall of Fame. Following his playing career, Hawerchuk has spent the past seven seasons as the head coach of the OHL’s Barrie Colts.

“I’m incredibly honoured to join the Winnipeg Jets Hall of Fame and to be recognized alongside the other greats of the past. I look back fondly on the nine years I spent with the Jets and living in the city of Winnipeg. It will be a real treat to return to the city for the ceremony,” says Hawerchuk. “A lot of my best memories in hockey happened during those nine years and it will be a lot of fun to relive those moments with the great fans of Winnipeg.”

Dale Hawerchuk will attend the induction ceremony as well as the Winnipeg Jets Hall of Fame Luncheon, taking place on Wednesday, Nov. 15, 2017 at The Fairmont Hotel in Winnipeg. More information about the luncheon will be released at a later date.