Winnipeg Free Press:  Now THAT is a handshake.  It isn’t just the Jets players who have elaborate pre-game handshakes.  Even the training staff have their own routines.

Winnipeg Jets:  Fixing up the Phone Booth.  Missed this article the other day which gives a comprehensive overview of all the changes that the MTS Centre has undergone as they have transitioned from the AHL to the NHL.

ECHL:    Mark Flood Alumni Profile.  He is a hard working player who gives his best effort each and every time he is on the ice.  As you can see from his humble beginnings, he isn’t going to take this opportunity to play with the Jets lightly.  While the Charlottetown, Prince Edward Island native is not listed on the Jets depth chart his play this season has him solidly in the conversation for coach Noel.

TSN:  Noel not happy with .500 record at break.  While many of the staff and players are new, this has a deja-vu feel about it.  Can the Jets prevent a Thrashers-like fall from grace?  They will need to develop some road punch over the course of 6 of the next 7 games.

Winnipeg Free Press:  Thorburn comes close but still can’t buy a goal.  He works hard and will be rewarded soon.  I  went back and watched his 8 goals from last season, 3 of which he scored in the first 3 Atlanta games to start the 2010/11 season.  The majority of which were all hard nosed heading to the front of the net type goals. 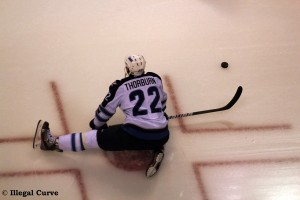 Winnipeg Sun:  Time off comes at right time for Jets.  No question they need some R & R time away from the rink.  Especially when the first task to start the 2nd half of the season is facing the tough Philadelphia Flyers on the 31st.

Illegal Curve:  Jets on a Deadline – Rangers 3 Jets 0.  Game recaps, video highlights and the NHL.com 3 Stars of the night.

Winnipeg Free Press:  Jets re-assign Patrice Cormier and Aaron Gagnon to the St. John’s IceCaps.  The Caps have some injuries so these two additions will be welcome for them.

The Telegram:  Gagnon makes a short-haul trip to join Jets.  It wasn’t just Gagnon in attendance as the entire IceCaps team, down to the team bus driver, was at MSG to watch the parent club get schooled by the Rangers.

Philadelphia Inquirer:  Flyers finally snag a shootout win.  This is a very dangerous Flyers team that can beat you in all facets of the game.

Press of Atlantic City:  Flyers Hartnell selected to All-Star game for 1st time.  Still kinda a snub considering he was an add-on for an injured Toews.