Winnipeg Free Press:  The Secret Handshake Club.  All the Jets pre-game routines are quite interesting to watch.  Even the refs have some pre-game rituals just before the game starts. 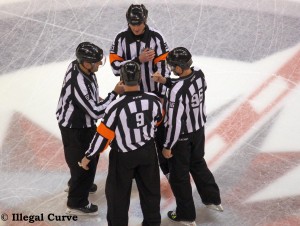 Winnipeg Sun:  NHL missing the Jets’ boat.  As I said yesterday while it is unfortunate that the Jets won’t be mentioned, officially, this will be an opportunity for the players to rest and get ready for a big 2nd half push.

Winnipeg Sun:  Trying to solve back-to-back woes.  Considering the Jets are a young team you wouldn’t think lethargy would be a factor but they have often looked tired in the 2nd game.  Something tells me the Jets are going to get their first win of the season in back-to-back’s against the Rangers.

Winnipeg Sun:  Top line plagued by injuries.  Perhaps the Kane/Little/Wheeler line has had to deal with all the injuries in the first half and will have a trouble free 2nd half. 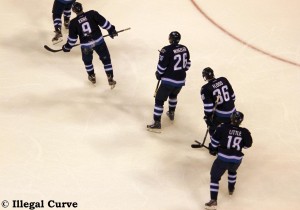 Winnipeg Sun:  Big thrill for little Jets fans.  Another very cool program that allows kids from all across the province to check out some Jets action.  As the flight deck is quite close to the IC seats in the press box we can often see these kids whooping it up during the games and you can see how much they appreciate the opportunity to watch the games.

ChrisD.ca:  Bobby Hull returning to Winnipeg for book signing.  He returns for the 40th (yes 40th) anniversary of one of the most iconic sports contract signings in the history of hockey.

Illegal Curve:  Jets on a Deadline.  Game recaps, video highlights and the NHL.com 3 Stars of the night from last night’s Jets 2-1 loss to the Canes.

The Telegram:  Getting to know Shawn Weller.  Always important for Jets fans to be aware of who is in the pipeline.

New York Post:  Rangers taking in coach Tortorella’s talking points.  Always best to be on a coach’s good side, especially one as fiery as Tortarella.

New York Daily News:  Sauer news for Rangers defenceman.  With another injury to a Rangers defenceman, you have to wonder if the scouting department is going to be out watching a team with a lot of defensive depth…..wonder who that could be!