Jets news: Jets kick off road trip in Carolina. New line like B’s in a pod. Putting Mason in against Hurricanes should be a no brainer for Jets. Kane, Buff notably absent. Jets and Beavers alumni teams face-off.

Next opponent news – Carolina Hurricanes: Ward had refocused his emotions on his game.

TSN:  Jets kick off road trip in Carolina.  If you still haven’t ordered the TSN Jets channel, why not join the Illegal Curve crew at The Cheer Bar and Grill on 437 Stradbrook for great food and prizes.

Winnipeg Free Press:  New line like B’s in a pod. Classic catch-22.  Burmistrov needs more ice time with better players to develop but has to play better to merit said ice time.  The next couple of game are going to be his time to shine and prove to coach Noel that he deserves 1st or 2nd line minutes.

Winnipeg Sun:  Putting Mason in against Hurricanes should be a no brainer for Jets.  If Mason gets the start for the Jets tonight will he be rocking the new pads?  He has been a Hurricanes killer beating them all three times the Jets have faced Carolina this season. 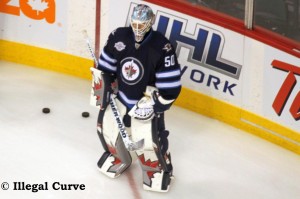 Winnipeg Sun:  Kane, Buff notably absent.  The Jets 3rd and 5th leading scorers are going to be missed by the Jets this week, especially given the importance of these two games against the Hurricanes and Rangers.

Carman Valley Leader:  Jets and Beavers alumni teams face-0ff.  Always fun for fans to watch these old teams get together and play some hockey.

The Telegram:  Two of three ain’t bad.  Derek Meech cleared waivers and played quite a few minutes for the IceCaps yesterday.

Fan590:  Murray shootout hero in IceCaps 3-2 win over Sharks.  Unlike the parent club, the Jets farm team showed they can win the 2nd game of a back-to-back.

News and Observer:  Ward had refocused his emotions on his game.  He has been the Canes go to guy, especially of late playing 17 of 19 games.