Winnipeg Free Press:  Bonds yield dividends.  Some players might not appreciate the intimate nature of the city, but if the Jets 2.0 are able to recreate the camaraderie that was experienced by the Jets 1.0, they will definitely boost their appeal to players already in the system.

Winnipeg Free Press:  Outdoor NHL in city?  Chipman open to it.  Fans have been abuzz since the announcement of the Jets return that there should be a Heritage Classic played in the new Bomber stadium.  I ask readers, which Canadian team would you most like to see play the Jets?

Winnipeg Free Press:  Injuries part of game….but.  Many players have their pre-game routines and in some instances that is skating/stretching without a helmet during the warm-up.  We will have to wait and see if the injury to the Oilers Taylor Hall spurs a reaction from the Jets brass similar to what has apparently been done in Toronto and Colorado. 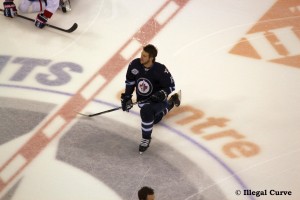 Winnipeg Sun:  First strike Jets’ key.  It would appear that most teams know one of the keys to success against the Jets.  Weather the initial 10 minute storm, and if the score is tied at zero, you have gone a long way to taking the crowd/team out of the game.  A visiting coach described it as playing 2 games within a game against the Jets.  A 10 minute game and a 50 minute game.

Winnipeg Sun:  Wheeler feeling fortunate.  With good reason.  He could have been a lot worse off than simply having to remain in hospital for 24 hrs and missing a couple of games.  Of course his return to the lineup last night was just what the doctor ordered for the Jets.

Winnipeg Sun:  Bogosian back soon.  Every time this team is about to get healthy they have a set back.  Luckily it appears that Zach Bogosian might be making his return to a game on Saturday against the Panthers who are currently tied with Washington for 1st place in the Southeast.

Hartford Courant:  Whale weekend.  Looks like the Caps are going to have an opportunity to harpoon themselves some Whale tonight, as Connecticut has had an extremely tough January.

Miami Herald:  Chicago provides a special lure for some Panthers players.  The Jets should be sending the Chicago Blackhawks a very nice bottle of win or 10.  After a team passes through the always tough Windy City, the Jets have the opportunity to pounce on what is left of them.  Last night they took on a tired Sabres team (who had lost 6-2 to Chicago on Wednesday) and on Saturday they face Florida who will first play in Chicago tonight.