Note:  As always stay tuned to Illegal Curve for all your audio from both dressing rooms.

Winnipeg Free Press:  The numbers don’t lie – Jets should be sellers at trade deadline.  It is somewhat difficult to synch this concept in your brain.  It was pretty well understood that the Jets were going to need a few years and some additional pieces before they could compete (seriously) in whichever conference they played in.  However with winning came new expectations and fans began to think playoff run.  However, is it worth trading away prospects to acquire a player to ‘just’ make the playoffs?  It is never easy to counsel patience in an instant gratification society but that is, unfortunately, just what the doctor ordered if this franchise is to have long term success.

Winnipeg Sun:  Jets likely to be sellers.  The Jets have just under 20 games before the trade deadline of February 27th.  Whether the Jets are buyers or sellers will be determined over the next month and a half.  We also took a look at some of the potential candidates to be moved by the Jets.

Winnipeg Sun:  Turbulent skies for Winnipeg.  We compared how this team had performed in 2010/11 to 2011/12 and after 41 games the Jets were actually slightly behind the Thrashers in terms of points.   The Thrashers really fell off the wagon (or is it on the wagon) from games 42-61 where they went 5-11-4 and the Jets are going to really need to get things going immediately if they want to avoid a similar fate.

Winnipeg Sun:  Healthy Slater key to success?  With the exception of the Sharks game, he has been excellent in the faceoff circle recently and currently has taken the most faceoffs for the Jets this season (338, 1 more than Bryan Little). 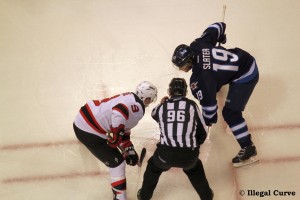 Winnipeg Sun:  Music to Miettinen’s ears.  Wonder if he would be willing to enter a Battle of the Bands at the West End Cultural Centre.

Winnipeg Sun:  Tale of two Jets teams.  The Jekyll & Hyde nature of this team has fans apoplectic.  Unfortunately they still have a number of back-to-backs this season.  Luckily they had the day off yesterday and they can get refocused on the Sabres who were demolished in Chicago last night.

Brunswickan:  Former St. John’s IceCaps forward joins Varsity Reds program.  The Brandon, Manitoba product is making a smart decision.  Use hockey to get an education, while still not giving up on your goal of playing professionally.

Buffalo News:  Leino’s lapse dooms Sabres.  Things have gone from really bad to extremely worse in Sabres land.  They are 2-6-2 in their last 10 and haven’t won a road game since a victory over Nashville back on December 3rd, 2011 .  Will the Jets send them to their 11th loss in a row on the road?

Buffalo News:  More thoughts on Lindy.  Is the longtime Sabres coach finally cracking?  Sounds like nothing more than standard coach aggravation at the media following a disheartening loss.