Winnipeg Free Press:  Jets recall Postma to bolster offence.  The offensively minded Postma could be just what the doctor ordered with injuries to the Jets more productive defencemen.

Winnipeg Free Press:  Jets better start flying before its too late.  While the Jets haven’t played well of late, it isn’t time to hit the panic button just yet.  In the next three days they play the Devils twice and the Senators once, teams that currently sit ahead of the Jets in the standings.  A little winning streak could quickly turn things around.

Winnipeg Sun:  Jets at fork in road.  We said last month that January would go a long way to proving if the Jets are contenders or pretenders.  While the month has begun in a most inauspicious manner, they can still salvage the month with a  hot streak and based on last week’s weather, a hot streak in Winnipeg in January is quite possible.

Winnipeg Sun:  Bad penalties Ladd’s burden.  The Jets captain is the leader and cannot afford to be taking these types of penalties, especially when the team is down on the scoreboard.  The Jets do some line juggling.  Guess which Devils goalie won’t be riding the pine like he was last game against the Jets. 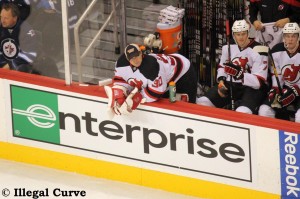 Winnipeg Sun:  Spark won’t come from Jets coach.  The coach can only do so much.  He tries to teach the players and they need to turn those lessons into actions on the ice during the game.  Yesterday’s practice had a lot of teaching moments and we will see if the Jets are apt pupils.

Winnipeg Sun:  Defeatist attitude seeps into Jets locker room.  None of the Jets players are taking this lightly.  Mark Stuart rejected the notion that this is simply a repeat of what happened last season (although he didn’t arrive until late February last year).

Illegal Curve:  Story and conclusion of two traveling Sharks cousins journey to Winnipeg.  We really enjoyed meeting these two cousins from California who have nothing but great things to say about their experience in Winnipeg.

The Times-Tribune:  Road-tested Penguins visit St John’s for pair of games.  Interesting dichotomy for the baby Penguins.  A very good road team who seems to play poorly at home.

NJ.com:  Parise feels Devils deserve to have a player in All-Star game.  While he might not like the implication, I’m sure he will enjoy the time off as many players don’t enjoy the obligation of playing in an All-Star game.