Winnipeg Free Press:  Wheeler being held for observation.  Jets are really going to need Wheeler to be healthy if they want to be successful on this road trip.

Winnipeg Free Press: No time for Jets to come unglued.  All this team can do is get together and try and get back to basics.  The Jets need to remember how to score.  Dirty goals is what they need to start getting and that is going to require guys heading to the front of the net.

Winnipeg Free Press:  Bedeviled, but brave.  If it was a December to remember, it has been a January to forget.  1 OT win to go with 5 regulation losses.  It has not been a kind start to 2012. 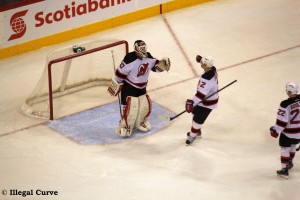 Winnipeg Sun:  Puck in the neck sends Wheeler to hospital.  Hopefully it just costs him last night’s game and the Jets leading scorer will be back in action on Monday night in Ottawa.

Winnipeg Sun:  Jets down in the dumps.  About the only real bright spot has been the exemplary play of Ondrej Pavelec who despite the losing streak has kept the Jets in most games.

NHL:  Jets confident they’ll overcome adversity.  The problem is the Jets can’t keep hoping that it will eventually happen.  If they want to regain their previous December form, they need to win the next couple of the road.

Winnipeg Free Press:   Beloved Teemu tops on ‘farewell’ tour.  He is simply the best.  Or in the case of the current NHL points race he is 14th, which isn’t too bad considering he currently sits at the top of a poorly playing Ducks team, ahead of guys like Perry, Getzlaf and Ryan.   He sure doesn’t look like he is slowing down anytime soon and he left fans in Winnipeg chanting “one more year”.  Of course they want that additional season to be in a Jets jersey.

The Telegram:  Penguins not stopped by IceCaps.  The Caps haven’t been the best home ice team and the WBS Penguins are just as hot on the road as St. John’s.  Teams have a re-match set for later today.

Ottawa Sun:  Cheapseats.  All-star captain fun begins.  This N That.  Off the Glass.  The Morning skate.  Around the boards.  Things that make you go hmmmm.

Ottawa Citizen:  Alfredsson lifts Senators over Canadiens.  This Senators team continues to climb up the Eastern Conference standings as last night’s win has them tied with Philadelphia with 56 points.

Ottawa Sun:  Turris a gift for Sens.  When he was in Winnipeg with the Coyotes you could sense that he wasn’t happy that he remained a member of the Phoenix team.  The trade to Ottawa has been a spark for this club.