Note:  The Jets won their second game in a row as they continue to play very well against the central division this season (10-4-1 including 6-0 at the MTS Centre).  The 5-3 win over the Blues puts the Jets in the position to finally get over the hump and win their third game in a row on Monday against the Ducks here in the city.  Today the Jets will hit the ice at 11 am for a practice.  Good news for the team is that Patrik Laine has had all restrictions removed.

Note II:  The Moose were chasing the Rampage all night long last night in San Antonio but ultimately fell 4-2 in the re-match when the home side scored on an empty net while killing off a penalty.  The Moose will have a day off today before they hit the ice for practice.  Next game is back in Cedar Park, Texas where they will face the Stars.

Winnipeg Sun:  Pavelec steps up as Jets bust Blues.  Another good game from the goalie who has spent the majority of the season in the AHL.  Ken breaks it all down in this recap. 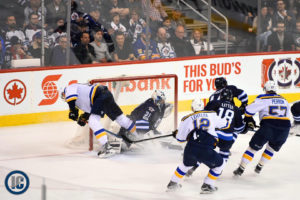 Winnipeg Sun:  Laine takes step closer to return.  More important than a win was the news that all the restrictions had been removed.

Winnipeg Free Press:  Jets, Blues ‘tenders familiar foes from time in AHL.  (Paywall).  Mike and I discussed it yesterday that it is a shame that they didn’t face off against each other the previous Friday when the Wolves were in the city to play the Moose.

Winnipeg Free Press:  Jets hit all the right notes in 5-3 win over Blues.  (Paywall).  The Jets had a solid goaltending from Ondrej Pavelec (especially in the middle frame), had an excellent power play, solid penalty kill and built an insurmountable lead over St. Louis.

St. Louis Post Dispatch:  Copley shines but Blues fall to Jets 5-3.  Always good to read about the game from the perspective of a beat writer that cover the Jets opposition. 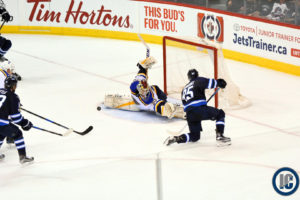 Sportsnet:  Pavelec sets Jets record for saves in a period in win over Blues.  Have to go back all the way to 2009 when he set the record for the franchise and you can put that in the category of things we didn’t anticipate this season.

CTV News:  New technology enables legally-blind boy to see Jets game for first time.  Just amazing what technology can do and I hope that young fan enjoyed the opportunity to finally get to see his team play a game.

Global News:  Jets celebrate win for a good cause.  Lots of needy people are going to get fed as a result of this food drive.

Illegal Curve: Injury Update on Drew Stafford suffers lower-body injury.  We should learn more today about the condition of the veteran winger today.

Illegal Curve:  Post-game recap.  Includes audio from both the Jets (Wheeler, Ehlers, Perreault and Pavelec), Blues (Shattenkirk) and from both Coach Maurice and Coach Hitchcock.

Official Manitoba site:  Rampage get revenge over Moose in re-match.  The Moose seemed to be chasing the game most of the night.  Tyler breaks it down in this recap which includes goal summaries, a game summary, quick hits and what’s next.

Topics:  Who is the best team in the NHL right now, Possible trade destinations for Kevin Shattenkirk, Player opinions on how to improve hockey games, Moose pick up a 2-0 win over the San Antonio Rampage