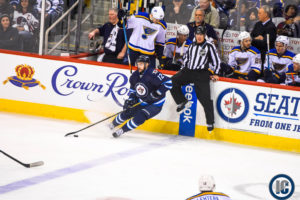 Drew Stafford wasn’t on the Jets bench late in the 2nd period and it was announced that he wouldn’t return to the game for the 3rd as he was out with a lower-body injury.  Following the 5-3 Jets win over the Blues coach Maurice didn’t have much news adding “lower-body and we will know tomorrow”.

Stafford last took a shift in the 2nd period at the 16:02 mark of the middle frame.  Once we get an update from coach Maurice tomorrow we will let you know.  In 34 games with Winnipeg he has four goals and eight assists for 12 points.