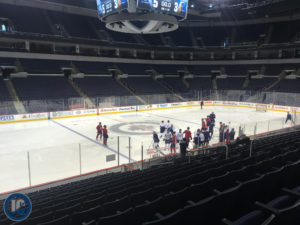 It was a fairly routine practice at the MTS Centre with the exception that Patrik Laine was wearing a normal uniform but still not skating on his usual line.  Drew Stafford was the only player missing from today’s skate  Connor Hellebuyck was out early to practice with goalie coach Wade Flaherty.

Lines and D pairs were:

Following skate we got an injury update from coach Maurice on Patrik Laine, Drew Stafford and Tyler Myers.

Patrik Laine:  On today’s skate.  Is tomorrow an option?  How does he feel?  What has this process been like for him?  On feeling like he can get out there.  On expectations on when he might be back in the lineup.

Ondrej Pavelec:  On coming back to Winnipeg next season.  Has he played well enough to think about next year? How would he evaluate his past two games?  Does he expect to play tomorrow?  Would he be OK to play back to back on Monday and Tuesday?  Has the past week sunken in?

Coach Maurice:  Update on Laine.  Could Laine play Tuesday?  Status of Stafford.  Does Tanev take Stafford’s spot?  Is there a scenario he sees where Pavelec could play for the Jets next season?  Addressing the three goalie system.  Why Copp over Petan?  Update on Myers.