Note:  The Jets had a successful weekend including a Friday Skills Competition, Saturday practice and ending with a 4-1 win over central division rival Colorado.  They will practice today at the MTS Centre before leaving for Vancouver when they will, oddly enough, play games on Tuesday and Thursday against the Canucks.

Note II:  The Moose are in a bad stretch right now as they lost again yesterday.  They are now 0-3-1 on this road trip which ends today in Iowa.  They will play the Wild tonight at 7 pm before the team takes off for five days for the Christmas break.

Note III:  Be sure to check out all the different calls of Patrik Laine’s 18th goal.  I’ve got the Finnish one, TSN Jets, Altitude Sports (Avalanche) and TSN 1290 Winnipeg.  Click here.

Winnipeg Free Press:  Alexander Burmistrov concerned about future with Jets.  (Paywall).  It has been problematic for him to crack the lineup when the Jets had injuries and now it looks like they are about to get healthy, which when you add 1 + 1, doesn’t really appear to equal a roster spot for the centre.  Coach Maurice said today following practice when Jason asked about Burmistrov’s place on this team “we both have a pretty clear understanding of where he’s at” which sounded rather ominous but at the same time is ambiguous enough to leave the bench boss some wiggle room if he ends up using 91 in the lineup.

Winnipeg Free Press:  Dynamic duo click on and off ice.  (Paywall).  Sometimes there isn’t a way to figure out how a duo will create chemistry, it just happens.  This season we have certainly seen that bond form between the sophomore Nikolaj Ehlers and rookie Patrik Laine.  Jeff has a lot more about this relationship in this article. 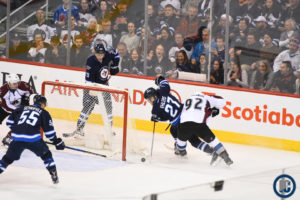 Winnipeg Free Press:  Jets 4-1 win not pretty, but didn’t need to be.  (Paywall).  Sometimes slow and steady wins the race and while it isn’t the prettiest way to win, the important thing was getting the two points.

Winnipeg Sun:  Jets better, faster, stronger in crushing Avalanche.  One thing was readily apparently watching these Colorado Avalanche…they are a team in need of some help.  They just didn’t look like they had much in the tank on Sunday afternoon.

Denver Post:  Avalanche allows back-to-back goals early in third in loss at Jets.  Always good to read a recap of the game from a beat writer that covers the Jets opposition.

TSN:  Jets’ top line one of the best in the NHL.  (Video).  The Jets’ line of Mark Scheifele, Nikolaj Ehlers and Patrik Laine has been so efficient this season and TH2N explains why chemistry has been a big reason for their success.

TSN:  Big second period fuels Jets over Avs.  (Video).  Dennis Beyak and Shane Hnidy take a closer look at the Jets’ great play in the second period, especially on the penalty kill, and highlight another impressive performance by Nikolaj Ehlers.

NBC Sports:  Are the Jets a playoff team? Patrik Laine seems to think so.  He certainly doesn’t lack for confidence.  Of course when you have 18 goals in your first 32 NHL games at 18 years of age I think that’s with good reason.

Illegal Curve:  Broadcast calls of Laine’s 18th.  (Video).  Laine’s 18th goal call in Finnish was so mesmerizing that I created a post for it along with the TSN, Altitude Sports and TSN 1290 calls of it.

Global News:  Moose winless in six straight following loss to Wild.  It hasn’t been a banner few weeks in Moose land, as they dropped another contest yesterday afternoon.  One more to go tonight before the team takes off for five days for the Christmas break.