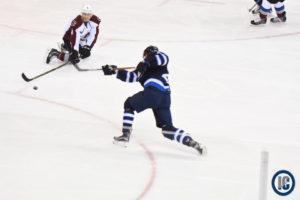 Finnish rookie Patrik Laine has demonstrated his rocket shot many times already this season for the Jets.  He scored his 18th goal of the year this afternoon in front of the home crowd, who have been lucky enough to witness 15 of those 18 at the MTS Centre.  He had a total of three points in today’s 4-1 Jets win, which gives him a total of 29 points (18 G 11 A) on the season and keeps him atop the rookie leader board.

I actually heard the Finnish call of his goal and couldn’t stop listening to it.  So here is the TSN Jets broadcast, the Altitude Sports Avalanche broadcast as well as the aforementioned Finnish broadcast of the Jets rookie’s 18th goal.

In addition to the TV calls of Laine’s goal, here is the TSN 1290 Winnipeg broadcast call from Paul Edmonds: