Jets news: Some encouraging news on injury front. Power rankings. No. 1 on buzz chart. Chevy keeping steady trigger finger. Renewal of hope. Mid-season awards. Selanne, Getzlaf won’t be playing for Jets. Little return energizes Kane, Wheeler. Leading the charge. The competitiveness of the Southeast division is the surprise of the season’s first half.

Winnipeg Free Press:  Some encouraging news on injury front.  An almost entirely  healthy team???  Seems shocking but the Jets are close to having all the pieces to the puzzle back together.

TSN:  Power rankings.  The Jets face the #1 team tomorrow night and while Boston remains in the first overall position, the Jets have fallen from 12th to 20th.

Winnipeg Free Press:  Jets No. 1 on buzz chart.  This Jets team has created a stir wherever they have gone.  Before the rebirth you would usually see a Jets jersey or two at a hockey game but now it is especially noticeable all the Jets fans from across North America who support this team.  Not surprisingly, in Buffalo, a large contingent of fans drove down from Toronto to support their Jets. 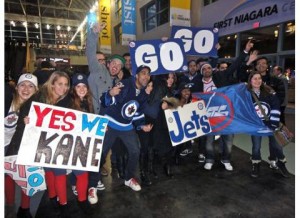 Winnipeg Free Press:  Chevy keeping steady trigger finger.  The Jets were not expected by many pundits to be buyers as the push for the playoffs is just getting underway.  The next 23 games will go a long way to determining whether GM Cheveldayoff will be a buyer or seller at the deadline, which falls on February 27th.

Winnipeg Sun:  Renewal of hope for Jets.  It is always good to be positive but the Jets face a monumental test tomorrow night at the TD Garden in Boston.

Winnipeg Sun:  Mid-season awards.  Handing out some mid-season hardware and we would have to agree with all of Ken’s picks.

Winnipeg Sun:  Selanne, Getzlaf wo’t be playing for Jets.  This is the most fun part of the year for fans of bubble teams.  The fans are excited because their team is competing and the rumour mill heats up each and every day (or hour) with a new possible trade.

Winnipeg Sun:  Little return energizes Kane, Wheeler.  He has been one of the most important players on the ice.  Whether it was scoring goals, winning faceoffs or getting the puck to his linemates, Bryan Little has shown he can do it all.

Winnipeg Free Press:  Leading the charge.  It is another innovation in the new NHL which allows these young fans to experience skating in front of 15,004 rabid fans.

Yahoo Sports:  The competitiveness of the Southeast division is the surprise of the season’s first half.  I don’t think many people predicted the Southeast to unfold in the manner.  Of course we still have 41 games to go so anything can happen.

TSN:  Albert scores with 42 seconds left as Caps down Monarch’s.  The Caps overtook the Monarch’s for first place in the East after they won both games against their division rival this past weekend.

Boston Globe:  Brad Marchand to face disciplinary hearing.  Not surprised that he is feigning ignorance on the hits legality.  We will know today if he will be suiting up against the Jets tomorrow.

Boston Herald:  Brad Marchand defends self.  For a repeat offender, the law usually doesn’t go lightly on you the second time you face disciplinary action, so he might find himself amongst the press for the next couple of games.