Illegal Curve:  Jets on a Deadline.  Game recaps from all the papers, video highlights and the NHL.com 3 Stars of the night from last night’s Jets/Sabres game.

Winnipeg Free Press:  Little draws assist in return.  Someone didn’t look like he missed almost a month with a foot injury.  He was quite noticeable on-ice while playing an excellent game in his return yesterday.

Winnipeg Free Press:  And heeeeere’s Johnny.  When we tweeted out that there should be an #OTPOOL last night when OT began, nobody took Johnny Oduya but he looked like a sniper when he put home that GWG. 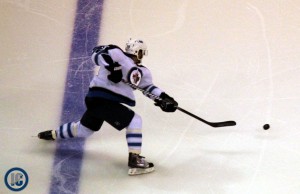 Winnipeg Sun:  Fehr’s play nets ice time.  The big winger from Winkler remains snake bitten although he did have a couple of good chances last night.

TSN: Jets reach halfway mark on a solid note.  That was a nice first half for the Jets but the tough part is just getting started.  With 6 more road games and 4 at home, it is going to be a busy January.

Grand Forks Herald:  UND tops Clarkson in Winnipeg.   Some fun college hockey was played in front of 7000 fans, both curious Manitobans and Fighting Sioux faithful up from North Dakota.

Boston Herald:  Canucks make Bruins pay for penalties.  Memo to the Jets on how to beat the B’s.

Boston Globe:  Poor decisions prove costly for Bruins.  The Jets are going to be facing some surly Bruins on Tuesday night as I’m sure coach Julien won’t let his players take it easy for next couple of nights.

Winnipeg Free Press:  Chipman, Hainsey at odds.  This is clearly just the opening salvo in the upcoming labour battle, I mean negotiation.

Winnipeg Free Press:  Jet says proposed alignment has flaws.  There is no question that there are flaws in the system.  Personally I am fine with the delay, in order that they can get it right.  The players can’t like the Jets playing in one of the two conferences with 8 teams, with only 4 playoff spots up for grabs.  Especially when the other two conferences have 7 teams with 4 playoff slots.

Winnipeg Sun:  Nasty battle brewing over realignment.  I’m sure most fans who pay hard-earned money to these billionaire owners and millionaire players don’t really feel too badly over “travel schedules” and “playoff realignment”.  Both sides better do their best to get something done.