Globe and Mail:  NHL players’ union blocks realignment.  Donald Fehr isn’t an easy negotiator and it appears he has fired the first salvo in the upcoming CBA battle.

Winnipeg Free Press:  Jets stuck in Southeast after NHLPA rejects realignment.  Would still make sense to flip the Jets and one of the current Central division teams.

Winnipeg Sun:  No realignment big loss for Jets.  Well if you look at the Central division where the Jets would be heading, the team’s 43 points puts them in a solid 5th place, 3 points back of Nashville.  The playoff structure is what killed this deal for the NHLPA, and perhaps Jets fans shouldn’t be too upset to see this realignment deal undergo a bit of a restructure.

Winnipeg Free Press:  Leading men.  Great read on the leadership of the Jets and the interplay between it and coach Noel.

Winnipeg Free Press:  Noel says blowouts no big deal.  End of the day a loss is a loss and it doesn’t matter what the score was.  While no team likes to lose big, it is sometimes a reality, and in the Jets case, something they need to forget as they prepare to face the Sabres tonight.

Winnipeg Sun:  Ladd lacking?  His style isn’t loud and overbearing, but Andrew Ladd seems to have the respect of everyone in the Jets dressing room. 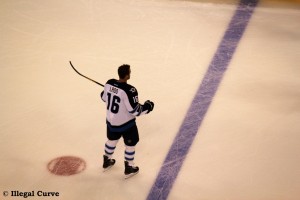 Winnipeg Sun:  Little’s foot inches back.  Jets fans had best repeat a phrase from Elaine Benes (Seinfeld) “get well, get well soon, we want you to get well”.

London Free Press:  Not likely to pull blockbuster.  This team wasn’t built for a post-season run this year.  That isn’t to say anyone in the Jets organization would complain if the team slips in this season.  The expectation is this will be a 2-4 year build.

Buffalo News:  Regier says no shake-up imminent as struggles intensify.  When we asked Mike Harrington of the Buffalo News back in November what Sabres fans expectations were, he said it was to win the Stanley Cup.  Have those changed?  Tune into the Illegal Curve Radio Show today as he will be a guest and we will see if fans have curbed their enthusiasm in Buffalo.

Buffalo News:  Pominville travels long road to 500.  The Sabres captain is hoping that tonight’s milestone evening is one to remember with a win.  Helps that Buffalo saw the return of Tyler Myers last night in Carolina.

Buffalo News:  5,000 plus fans watch game on scoreboard.  Extremely cool of the Sabres to put on a show for fans that aren’t able to watch the game on television because of an ongoing dispute between cable providers.