Note:  The Jets have played and traveled quite a bit over the last little while and the team will take today off before they get back into action against the Rangers in New York on Sunday.

Note II:  The Moose are looking to sweep their weekend series with the Monsters tonight at the MTS Centre.  Puck drops at 7 pm as Manitoba looks to extend their win streak to four straight.

Winnipeg Sun:  Jets are an enigma, but you can’t knock their hustle.  Everything you think you know about the Jets toss out the window.

Winnipeg Sun:  Resilient Jets leave Red Wings in dust. Not that I’m complaining since it will make for an exciting season but does anyone think that we are going to be seeing these types of games for the rest of the year? 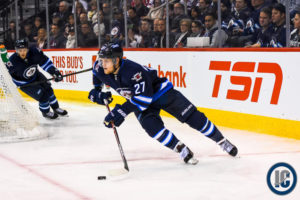 Winnipeg Sun: Coach Maurice doesn’t back down from comments about controversial penalty.  Just prior to the game against Detroit Ted spoke with the Jets bench boss to discuss his comments from the previous game.  I’m left wondering if the NHL uses snail mail to send that letter or is it in email form?

Winnipeg Free Press:  No closer to signing, despite proximity.  (Paywall).  Cannot help but think that Michigan native Jacob Trouba would have relished the opportunity to play at Joe Louis Arena one last time before it gets shut down in favour of the new rink in Detroit next season.  Of course if he gets traded to the Winged Wheel (or even a team in the East) before December 1st it may not be his last opportunity.

Sportsnet:  Who’s the NHL’s hardest hitter?  (Video).  One hint who most NHLers named when queried about who levels the most punishing hits in the league: #33.

Sportsnet:  Can Mark Scheifele become a top-10 centre who scores 40 goals?  He has continued to meet expectations from a demanding fan base and they will only be too happy to see him achieve this mark.

Winnipeg Sun:  Bombers, Jets weigh in on U.S. election.  In an election this ugly I’m not surprised that folks don’t want to attach their names to it.

Illegal Curve:  Mathieu Perreault is day-to-day, Joel Armia back to Winnipeg.  As if the Jets weren’t injured enough coach Paul Maurice unveiled another couple of injuries to add to the Jets list in the infirmary.

Illegal Curve:  Jets are gauging trade interest in Alexander Burmistrov.  With the focus on Trouba and Pavelec we now have a new player to keep tabs on according to Gary Lawless of TSN and TSN 1290 Winnipeg who broke this news.

Illegal Curve:  Manitoba Practice Report.  The Moose recalled a player from Tulsa to offset the loss of Nic Petan who was himself recalled by the Jets.  Includes video following yesterday’s skate.