Injury update on the Finnish winger. 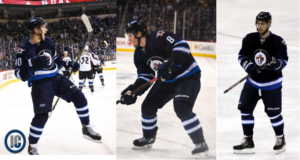 Seems like we cannot go a Saturday night without the Jets getting mentioned by the HNIC panel.  Tonight was no different as we learned the following:

– “Joel Armia could be out six to eight weeks with his ankle injury”;
– “No update on Perreault”
– Indicated that Kurt Overhardt and Kevin Cheveldayoff met in a stairwell, of all places, to have the chat about Trouba.
– On Burmistrov and the fact that it “isn’t working for either side”.

– Jacob Trouba’s agent Kurt Overhardt and Jets GM Kevin Cheveldayoff met in Detroit.  “Feeling is that it is still kinda quiet.”  Indicated that Jets would like to sign him to that same contract that other young defenceman have signed.  (i.e. Morgan Reiley five million dollars, six years – still tradeable)

– Spoke to a Hall of Fame defenceman on switching sides “He feels that if you have good feet and good hands you can make the adjustment easily.  You just have to embrace it.”