Illegal Curve:  Jets on a Deadline.  Game recaps from all the papers, video highlights and the NHL.com 3 Stars of the night.

Winnipeg Free Press:  United Way nets Jets tickets.  We’ve been promoting this fundraiser for the past couple of days.  If you have been shut out of Jets tickets why not drop $20 for a chance to win tickets (or even a luxury box) with the money going to a great local charity.

Winnipeg Free Press:  Noel steps carefully through language minefield.  Count me as someone who is sick of hearing about this topic.  Perhaps it matters to those in Quebec but I’d be more concerned about my team winning hockey games, than what language my coach is most comfortable speaking.

Metro News:  It’s best player by committee.   It is a testament to the team’s cohesion and coach Noel’s system that they have been able to keep winning despite losing keys players throughout the season. 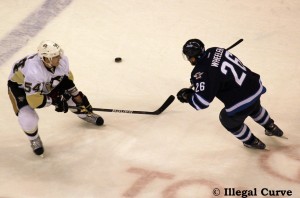 CBC:  Alcohol served to minor at Jets home opener.  I’m sure the Jets will get a small fine for this infraction.

Montreal Gazette:  Red Fisher says Jets are this year’s surprise team.   High praise from one of the most knowledgeable sports writers in the hockey world.

The Telegram:  All-star nods for IceCaps.  The Caps could have had 4 or 5 players selected when you look at this team.

Toronto Star:  Will Jonas Gustavsson continue his strong play?  One of five questions asked before the Jets/Leafs game.  They will be answered, of course, once the game concludes.

Globe and Mail:  Leafs goalie Gustavsson has hot hands, even if outdoors.  Appears that the Jets will be facing the Monster tonight between the pipes.

Toronto Star:  Leafs waive Colton Orr.  Looks like the Winnipeg product might not have much of a future with the Leafs.

Toronto Sun:  Armstrong practices full-tilt.  He won’t be ready for tonight’s game against the Jets but has learned a valuable lesson on concussions.