Jets news – Up, up and away. Real test ahead for Jets. Powerful power plays.

World Junior Report: Scheifele growing his game. Canada may be perfect in the standings but not on the ice. Winter Classic, not World Juniors, captures U.S. imaginations.

Winnipeg Free Press:  Jets are up, up and away.  It was a December to remember but it is time to put that in the past and to focus on the task ahead.  9 road games and only 4 at the friendly confines of the MTS Centre.  The Jets are going to have to take a page out of the IceCaps book, as the farm club hadn’t lost in regulation on the road until the other night.

Winnipeg Sun:  Real test ahead for Jets.  The Jets are going to have to show they have learned enough about winning at home and can translate that to the road with all the road games they will be playing in January. 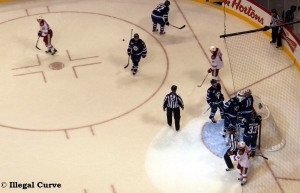 Winnipeg Sun:  Jets powerful power plays.  The Jets are 14th overall in the league in PP% but have improved this category in the month of December.

Illegal Curve:  Year in Review.  It has been quite the year and we take a look back at some of the most viewed, commented or interesting stories of 2011.

The Telegram:  Marlies hand IceCaps a rare road loss.  The impressive streak of no regulation losses away from the Mile One Centre fell just one short of the AHL record.  It also came against a Toronto team that has the best home record in the AHL.

Winnipeg Free Press:  Teammates Subban, Plekanec fight at practice.  Never going to be good for business when the team is disintegrating from the inside.

Montreal Gazette:  Coach Cunneyworth clearly frustrated.  It was clear when Montreal was in Winnipeg that coach Cunneyworth was frustrated and it hasn’t gone much better for the coach of the Habs with his team 3-7-0 in their last 10 games.

Globe and Mail:  Canadiens re-sign Josh Gorges.  Never going to be confused for an offensive threat, the Canadiens have a solid defensive defenceman for another 6 years.

Winnipeg Free Press:  Scheifele growing his game.  Scheifele can clearly score and pass but it was other aspects of his game that needed development, which is why the Junior experience is so important to his continued development.

Edmonton Journal:  Canada may be perfect in the standings but not on the ice.  Only in Canada would an unbeaten team cause some hand wringing.

National Post:  Winter Classic, not World Juniors, captures U.S. imaginations.  It isn’t difficult to understand why this tournament is unable to compete with an event like the Winter Classic, especially in light of the early exit by the U.S. team this year.