Jets send Patrice Cormier back to AHL, Slater to return. 2011 was a year to remember. Jets snapshots. Jets on a Deadline (game recaps), Audio from both dressing rooms.

Next opponent news – Montreal Canadiens: Habs falls short in Florida. Racial slur alleged in Habs loss to Panthers. The year that was and the year that will be.

Winnipeg Free Press:  Jets send Patrice Cormier back to AHL, Slater to return.  Cormier was definitely not a detriment when he played the 2 games for the Jets.  In fact he was 12 for 12 in the faceoff circle.  Will be nice to have Slater back in the lineup.

TSN:  2011 was a year to remember.  Plenty of amazing moments from the year that has just concluded.  IC will have our own year in review soon. 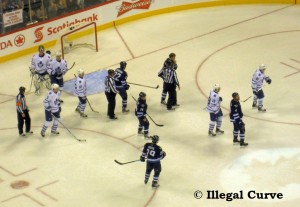 TheFan590:  Marlies knock off the IceCaps.  The IceCaps managed to make it to 2012 without a regulation loss on the road until today.

Winnipeg Free Press:  St. John’s pull out 4-3 shootout win over Toronto.  Nice to see the AHL affiliate end 2011 on a high note.  This victory ensured that the Caps end 2011 without a regulation loss on the road.

AHL.com:  Keith McCambride earns all-star berth.  As a result of St. John’s having the best record in the Eastern conference by today’s date, the Caps bench boss is heading to the all-star game in Atlantic City.

Montreal Gazette:  Habs falls short in Florida.    As coach Noel would say, there is little “joy” for Habs fans these days as their team continues to slide down the Eastern Conference standings.

CBC:  Racial slur alleged in Habs loss to Panthers.  As Panthers coach Kevin Dineen said, it is up to the league to investigate and hand out any punishment once they’ve made their determination as to what, if anything, was said.

Montreal Gazette:  The year that was and the year that will be.  Dave Stubbs goes over all the moments of note from the past year for the Habs and looks ahead to 2012.